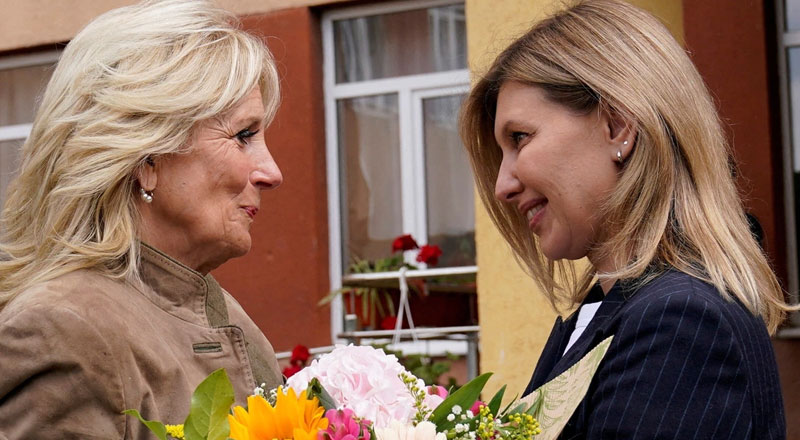 Showing her support to the war-torn country in its fight against Russia, US First Lady Jill Biden on Sunday made an unannounced visit to Ukraine, according to a report by Reuters. She also met her Ukrainian counterpart Olena Zelenska.

The US First Lady also celebrated Mother’s Day in Slovakia, earlier in the day, where she interacted with the Ukrainian mothers displaced due to the war. She assured them that the ‘hearts of American people’ are with them.

“I wanted to come on Mother’s Day,” the U.S. first lady told Zelenska. “I thought it was important to show the Ukrainian people that this war has to stop and this war has been brutal and that the people of the United States stand with the people of Ukraine.”

Biden spent about two hours in Ukraine, traveling by vehicle to the town of Uzhhorod, about a 10-minute drive from a Slovakian village that she toured on the border.

The two first ladies came together in a small classroom, sitting across a table from one another and greeting each other in front of reporters before meeting in private. Zelenska and her children have been at an undisclosed location for their safety.

The US First Lady conducted the kind of personal diplomacy that her husband would like to be doing himself.

President Joe Biden said during his visit to Poland in March that he was disappointed he could not visit Ukraine to see conditions “firsthand” but that he was not allowed, likely due to security reasons. The White House said last week that the president “would love to visit” but there were no plans for him to do so at this time.