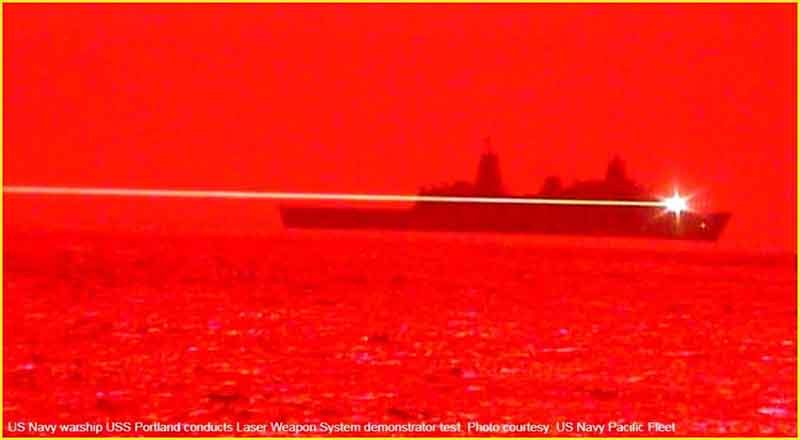 The US Navy has successfully tested a new high-energy laser weapon that can destroy aircraft mid-flight and  also can shoots down drone mid-air, the Navy’s Pacific Fleet said in a statement Friday.

The US Navy’s ‘USS Portland’ ship had on May 16 tested a laser weapon capable of destroying aerial, sea, and land-based threats, a press release by the Pacific Fleet six days later informed, adding that the new weapon will be “redefining war at sea for the Navy.”

The ‘USS Portland’ is the 11th San Antonio-class amphibious transport dock ship of the United States of America Navy, the May 22 release says. The laser weapon that was fired is formally called the “Solid-State Laser-Technology Maturation Laser Weapon System Demonstrator (LWSD) MK 2 MOD”.

The laser weapon was fired over the Pacific Ocean to bring down an unmanned aerial vehicle, for the purpose of testing.

“The Solid State Laser Weapons System Demonstrator is a unique capability the Portland gets to test and operate for the Navy while paving the way for future weapons systems. With this new advanced capability, we are redefining war at sea for the Navy,” Captain Karrey Sanders went on to state.

The video released by the US Pacific Fleet, headquartered at Pearl Harbor in Hawaii, shows a laser beam emerging from the weapon system on the USS Portland and then goes on to show a drone hit by the same.