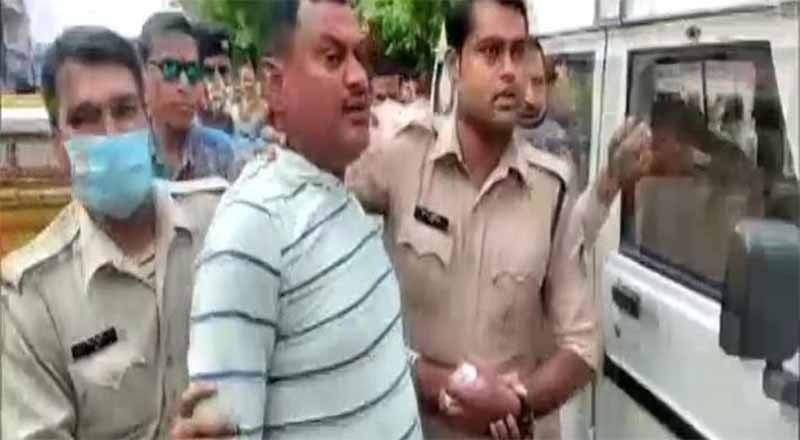 It was around 7.30 am on Thursday in the temple town of Ujjain, which houses the famous Mahakaleshwar Mandir, when dreaded gangster Vikas Dubey arrived in a private car having Uttar Pradesh registration number with two others for a darshan of the deity. Devotees chanted Jai Mahakal inside the Lord Shiva temple, one of the 12 Jyotirlings in the country, blissfully unaware about the presence of a man, who had triggered one of the biggest multi-state manhunts by the police in recent times.

But Dubey, wanted for the killing of eight Uttar Pradesh policemen in an ambush in his hometown of Kanpur last Friday, ran out of luck after making a dramatic escape from the shootout site and then avoiding police dragnets for almost a week. He also faces dozens of other criminal cases.

SponsoreAfter purchasing a ticket worth Rs 250 for VIP darshan of the deity, Dubey went to a shop selling flowers and prasad, where the seller, Suresh Mali, identified the gangster as he had seen his photos on news channels for the last few days, temple sources said.

An alert Mali immediately called constable Ghanshyam Mishra over the phone and informed him that a person looking like Dubey has arrived in the temple. Mishra, in turn, alerted cops at the police post near the temple and also a private security guard, identified only as Rahul, about Dubey’s presence.

They also informed Mahakal Security Officer Ruby Yadav who kept a close watch on CCTV and identified Dubey from a mark on his forehead, a police official said. Meanwhile, Dubey, unaware that the long arm of the law was fast closing on him, went inside the temple for a darshan of the deity.

Just when he was coming out of the temple, Dubey was stopped at the exit gate by security personnel and cops, and was subsequently arrested, Ujjain SP Manoj Singh told reporter. The SP said when cops asked him about his real identity, he said I am Vikas Dubey, resident of Kanpur.

He was then taken to the Mahakal police station for questioning and senior police officials of both Madhya Pradesh and Uttar Pradesh were informed about his arrest. “I was posted on the VVIP gate and discourse hall of the temple and when I got information that a person looking like Vikas Dubey was roaming in the temple premises. I went up to him and asked him to show his identity card, but he presented a fake ID,” said constable Vijay Rathore.

“I crossed checked that with his photos on WhatsApp and found him to be suspicious following which I informed senior officials about it and stopped him from going anywhere. “He tried to run away by pushing me but I prevented him from doing so,” Rathore said.

Before entering the temple, he asked a security guard, Gopal Kushwaha, to keep his bag and shoes in a locker room situated close to the gate of the shrine. I asked him to keep his bag on the rack which he did and moved on. Later, he was caught when he tried to run away, Kushwaha said. Another security guard, Lakhan Yadav, said he was watching Dubey’s movements in the temple premises for nearly two hours on CCTV.

He first tried to enter inside the temple from the rear gate, Lakhan Yadav said. Madhya Pradesh home minister Narottam Mishra said A constable Ghanshyam (Mishra) posted in the temple got suspicious after spotting him.

“He called other security personnel and four of them then took Dubey aside to question him after which a number of other persons associated with the temple recognised him and subsequently, he was arrested. “Besides, his two other associates Bittu and Suresh, too, were arrested,” Mishra said.

Mishra did not clarify for the whole day whether Dubey was arrested from inside the temple or outside it, but SP Manoj Singh said the gangster was stopped after he was coming out of the shrine by security personnel on suspicion. After Dubey was caught, cops searched his bag and found clothes and some eatables in it, Kushwaha said.

When cops were taking him to an undisclosed location in a jeep, he was heard shouting, Main Vikas Dubey hun, Kanpur wala. At this point, a constable hit Dubey on his head from behind and asked to keep quiet.

After that police moved him to an undisclosed location and later handed him over to the Uttar Pradesh Special Task Force which took him to their state by road.

The UP police say the car in which Vikas Dubey was travelling overturned and he and other policemen were injured. The criminal snatched a gun from an injured cop and tried to escape, the police said. He was surrounded and asked to surrender but he opened fire, forcing retaliatory shooting, claimed the police.

A report says, the video had taken around 6.30 am, just half an hour before the encounter, shows media cars chasing the convoy being stopped. Many, including Opposition leaders, have questioned the encounter and are now demanding for a probe into the killing of Vikas Dubey.

Hours before the encounter, an advocate had filed a petition in the Supreme Court seeking a direction to the Uttar Pradesh government and police to ensure that he is not killed.

Opposition parties targeted the Bharatiya Janata Party government in Uttar Pradesh after the encounter. Bahujan Samaj Party chief Mayawati demanded a Supreme Court-monitored probe into the encounter as well as the ambush in which eight policemen died last week and the Congress general secretary Priyanka Gandhi Vadra said the criminal is now gone and asked what about those who had “protected” him.