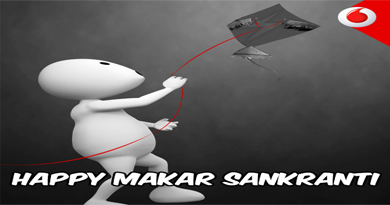 Makar Sankranti on 14th January 2018, heralds the advent of spring and the beginning of the Sun’s northward journey. This week, Vodafone India will be conducting a Safe and Happy Sankranti campaign to urge the residents of Jaipur/Kota to stay safe from ‘Manjha injuries and keep the streets clean by disposing torn kites in bins.

As part of its commitment to support the Govt. of India’s “Swachh Bharat Abhiyan,” Vodafone will also urge residents to desist from littering and keep their city clean by disposing torn/used kites only in bins or walk into the nearest Vodafone store to exchange torn kites for new ones, free of cost.

Conveying his Uttarayan/Sankranti greetings to the residents of Rajasthan, Amit Bedi, Business Head – Rajasthan, Vodafone India, said, “Makar Sankranti is a widely celebrated festival in Rajasthan and each year we have seen several people getting injured with ‘manjha’ cuts. The popular kite flying competitions tend to leave streets littered with torn, damaged kites. This year, Vodafone is working to ensure that people stay protected from ‘manjha’ bruises. We urge citizens to use the protective bands for neck that will be distributed free of cost at key traffic signals in Jaipur/Kota between 11th and 13th January, 2018. We also request citizens to maintain cleanliness by disposing used kites in bins. Alternately, they can walk into Vodafone stores in Jaipur/Kota to receive a brand new kite in exchange for damaged kites.”