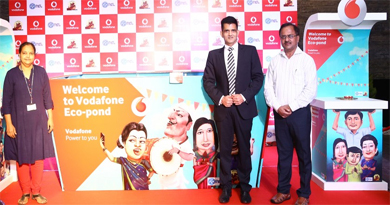 Vodafone India has unveiled its unique initiative ‘Vodafone Eco-Ponds’ on the occasion of 125th anniversary of Ganeshotsav celebrations in the city. Vodafone’s Maharashtra & Goa circle has partnered with Pune Municipal Corporation (PMC) and National Chemical Laboratory (NCL) in an attempt to help citizens across the city celebrate and immerse Ganesh idols in an environment friendly manner.

Vodafone has set up ‘Vodafone Eco-Ponds’, a temporary water tank setup equipped with a promoter and a life guard at 8 Vodafone stores across the city. Punekars can visit any of the stores with their Ganesh idols, where they will be assisted to carry out the Visarjan.

Vodafone stores located at JM Road, Hirabaug, Wakdewadi, Aundh, Karve Road, NIBM Road, Kalyaninagar and Kharadi will be equipped with Vodafone Eco-Ponds. Further to this, devotees can also dial 7391000000 to locate all the Vodafone Eco-Ponds.

Additionally Vodafone also plans to set up a Mobile Visarjan Van, which will be visiting select large housing societies, old age homes, where it would provide Visarjan facility exclusively to the residents of the society.

Speaking about the initiative Ashish Chandra, Business Head, Maharashtra & Goa Circle, Vodafone India said, “Ganeshotsav is one of the most celebrated festivals in Pune and being the 125th anniversary this year, it makes it even more special. As much as we feel part of this festive buzz, we are aware of the impact, festival leaves on the environment. PMC along with NCL have been in the forefront in encouraging people to undertake immersion at home in order to keep water bodies from polluting. Vodafone is extremely happy to support them with our ‘Vodafone Eco-Ponds’ initiative that aims to reach out to as many citizens to help them carry out Ganesh Visarjan in an eco-friendly manner. I would like to invite Punekars to visit their nearest Vodafone Eco-Pond and give an environment friendly farewell to their beloved Ganpati Bappa”.

Dr. Shubhangi B Umbarkar – Senior Scientist, Catalysis Division – CSIR National Chemical Laboratory said, “First I would like to thank Vodafone team on behalf of NCL for coming forward to promote the “Eco-friendly Ganesh Visarjan” process developed by NCL. This is social project on which CSIR NCL has worked for almost three years in collaboration with PMC. Already last year many people have given positive response and around 25-30000 people have implemented it at home. But looking at the population of Pune city, this number needs to increase multi fold and I am sure initiative taken by Vodafone will have positive impact in achieving this goal. I would appeal all to either use clay idols or for POP idols use Eco-friendly Ganesh Visarjan process developed by CSIR-NCL.”