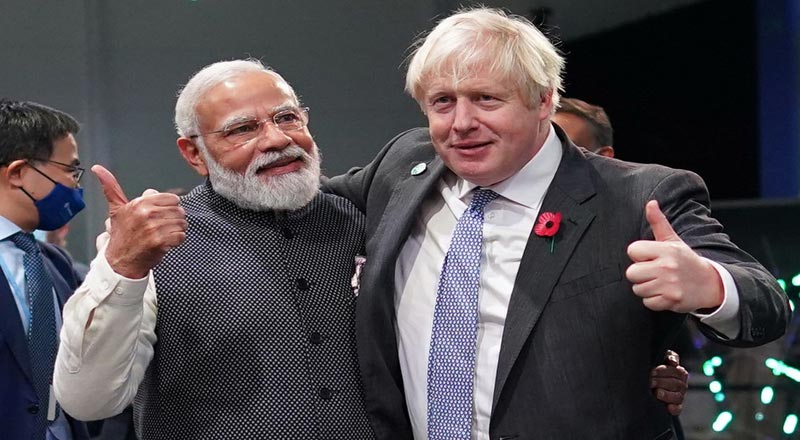 UK Prime Minister Boris Johnson is visiting India next week and his visit will focus on “things that really matter to the people of both our nations – from job creation and economic growth to energy security and defence”.

Johnson, who took to Twitter to announce his official visit, said –

“This week I’ll be travelling to India, to deepen the long-term partnership between our countries. As we face threats to our peace and prosperity from autocratic states, it is vital that democracies and friends stick together.”

He went on to add that “India, as a major economic power and the world’s largest democracy, is a highly valued strategic partner for the UK in these uncertain times”.

Johnson has planned his visit following the successful completion of four out of 26 chapters in the ongoing India-UK free trade agreement (FTA) negotiations. Prime Minister Narendra Modi and Johnson are expected to take stock of the negotiations and mandate a timeline for the possible completion of the process, initially set for the end of this year.

According to officials, there has also been significant progress in the remaining 22 chapters of the FTA at the end of the first two rounds of official negotiations, with the third round of talks scheduled for later this month.

The Russia-Ukraine conflict is likely to feature strongly during the meeting, while other regional matters such as the situation in Afghanistan and the UK’s Indo-Pacific tilt will remain high on the agenda of the bilateral visit.

The focal point of Johnson’s India visit is expected to be on April 21 and 22, when bilateral discussions and interactions with Indian business leaders are on the cards.

Johnson will also use the visit to drive progress in the Free Trade Agreement negotiations launched earlier this year and boost the country’s total trade by up to £28 billion annually by 2035 and increase wages across the UK by up to £3 billion.