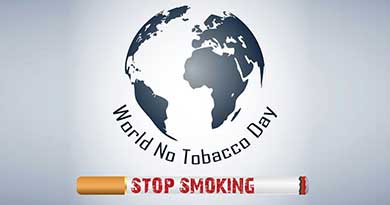 Dear Smokers, Smoking Kills. Smoking causes cancer. But of course you aren’t oblivious to that! But do you know which of your organs is the greatest victim of smoking? Lungs? Well, you couldn’t have got it more wrong. It is your heart that tobacco smoking affects the worst! In the early stages it is the lungs that gets affected and every smoker literally feels the repercussions of smoking on their lungs as they pant for breath and are divested of certain degree of vigour and stamina. Then takes over the regular bouts of morning wheezes. However, it is the cardiovascular disorders triggered by smoking that eventually acts as a sneaking assassin!

May 31 has been denominated as the annual World No Tobacco Day (WNTD)by the World Health Organization (WHO). The theme for this year’s WNTD is “Tobacco and heart disease”. The cynosure of the WNTD 2018 will be how tobacco impacts the cardiovascular health. Tobacco use is known to be lethal factor inducing cardiovascular diseases (CVD), that ranges from coronary heart disease and peripheral vascular disease to stroke. According to the reports by WHO, CVD is one of the major causes of the deaths in India and over 12% of all the deaths related to CVD are credited to smoking, either active or passive. Yet the awareness of the public about the impact of tobacco on the heart and the circulatory system is almost negligible.

Carbon monoxide, emitted during smoking tobacco, binds to haemoglobin- with an affinity that is 200-250 times greater than that of oxygen- and forms carboxyhaemoglobin and stays in the blood stream even two to four hours after smoking. This not only deprives the body of the necessary oxygen but its nocuous properties damage the smooth endothelium lining of blood vessels. Nicotine present in tobacco also damages the endothelium and trigger inflammatory reactions. This leads to deposition of cholesterol and narrowing of the arteries. Eventually absolute blockage occurs due to which all downstream tissues which are to be supplied with oxygen by the blood vessel starts to suffocate and die. The most common site of circulatory tissue death for a smoker is the heart muscle that leads to a heart attack, followed by the brain leading to a stroke.

By designating “Tobacco and heart disease” as the theme of WNTD 2018, WHO aims to promote awareness on the stark connection between tobacco and heart diseases, and on the viable measures that can be undertaken by the government and the public health organizations to reduce tobacco induced heart health hazards. Tobacco is consumed in multifarious ways such as cigarettes, bidis, cigars, pipes, creamy snuff (tooth paste), kreteks and gutkha. The day is celebrated across the world with the objective to encourage tobacco consumers to quit consumption of tobacco in all forms. It is of utmost necessity to ban the use of tobacco globally since it fosters many ailments that are fatal like Chronic Obstructive Pulmonary Disease, Heart attacks, emphysema, and stroke, apart from the well chronicled lung cancer, throat cancer and oral cancer.

In India, approximately 10 lakh people die every year due to tobacco consumption. Tobacco smoke contains about 4000 chemicals in every puff, of this at least 250 are known to be hazardous and more than 50 are recognized as lethal carcinogens. In every form, tobacco is toxic, noxious and malignant. Even non-smokers today, are not immune from this bane. In grown-ups, passive smoking leads to chronic cardiovascular and respiratory ailments like coronary heart disease and lung cancer. In infants, it can be fatal. Pregnant women are at high risk too, since passive smoking can lead the neonate to suffer from low birth weight. Children daily breathe in air tobacco smoke in public places. WHO data has corroborated that, children constitute almost 28% of the deaths due to passive smoking.

Tobacco consumption ranks as the second leading cause of CVD, after hypertension. This is indeed a matter of consequence, that demands our attention and firm action. Government should come forward with initiatives to ban smoking. It is high time we realise that we are sitting on a ticking bomb, which if not diffused timely would be fatal for the entire society. Let us create a tobacco free world!