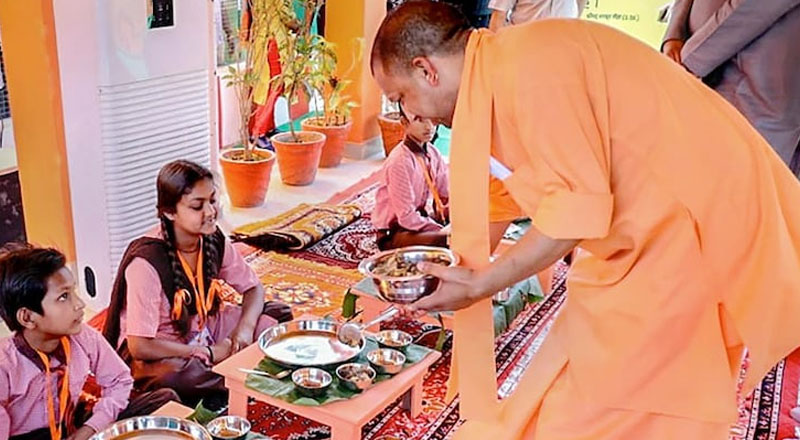 The campaign aims to ensure 100 per cent enrollment in the primary and upper primary schools across the state.

Uttar Pradesh Chief Minister, Yogi Adityanath, on Monday launched the month-long ‘School Chalo’ campaign in Shravasti, the district with the lowest literacy rate in the state, on Monday.

The UP CM aims to ensure 100 per cent enrollment in the primary and upper primary schools across the state.

The campaign will give priority to the districts with low literacy rates, including Shravasti, Bahraich, Balrampur, Badaun and Rampur.

During the launch, CM Yogi urged the legislators and education department officials to adopt a school each and work towards their transformation in terms of facilities such as well-equipped libraries, smart classes, provision of safe drinking water, and toilets as they did during his first tenure as CM following the launch of Operation Kayakalp in 2017.

He said, “Since the launch of Operation Kayakalp in 2017, 1.34 lakh primary schools have undergone a facelift in UP with provision of drinking water facilities, furniture, construction of toilets, inclusion of smart classes and improvement in the quality of mid-day meals. Now, I want you to adopt the remaining schools for their modernisation.”

He also asked the councilors, panchayat representatives and others to conduct door to door visits in their areas to ensure that every family sends its children to school.

Meanwhile, admission certificates were distributed to some students at the launch whereas hearing aids were given to some differently-abled students by the CM.

CM Yogi also talked about bringing changes to the curriculum to include the lives of great people of India and including sports for the holistic development of children.