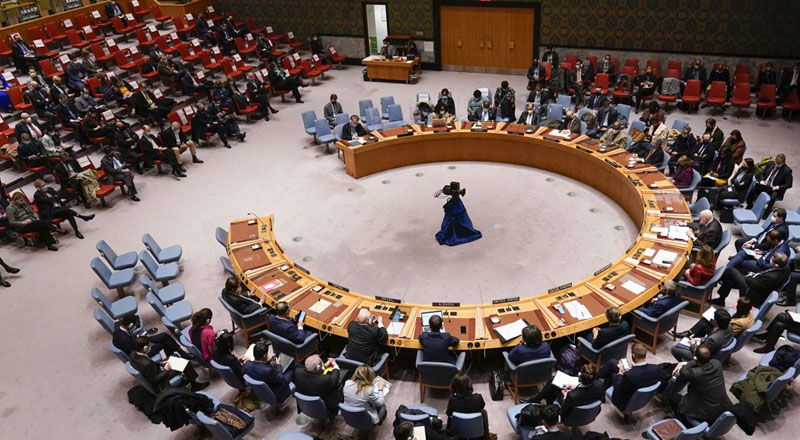 Addressing the UNSC meeting, Zelensky shared the plight of the citizens of Ukraine and alleged that civilians were crushed by tanks, women were raped and killed in front of their children by invading Russian forces.

“What the Russian military did in Bucha is cruelty. The UN Charter has been violated literally. The massacre in Bucha is only one of many examples,” he alleged.On Saturday, hundreds of civilian residents were found dead on the streets of Bucha, a city of Ukraine, by their homes, and in mass graves. While Kyiv has accused Moscow of the Bucha massacre, the Russians denied the allegations and said that it was Western propaganda.

Ukraine’s President Volodymyr Zelensky had on Monday also visited the town of Bucha.

Emphasising that the UN needs to act immediately, Ukrainian President said its system must be reformed immediately. “There must be a fair representation of all regions in the Security Council. Russian military must be brought to justice,” he added.

Meanwhile, Under-Secretary-General Rosemary A. DiCarlo has said that the Office of the United Nations High Commissioner for Human Rights (OHCHR) has received credible allegations that Russian forces have used cluster munitions in populated areas at least 24 times.

“Allegations that Ukrainian forces have used such weapons are also being investigated,” she added.

UN Secy-Gen António Guterres in his opening remarks said that he will never forget the horrifying images of civilians killed in Bucha, while also calling for an independent investigation to guarantee effective accountability.

“I was shocked by the personal testimony of rapes and sexual violence emerging now,” he said.

“We’re urging all countries to keep markets open, resist unjustified and unnecessary export restrictions and make reserves available to countries at risk of hunger and famine. The use of strategic stockpiles and additional reserves could help ease this crisis in the short term,” the UN chief added.