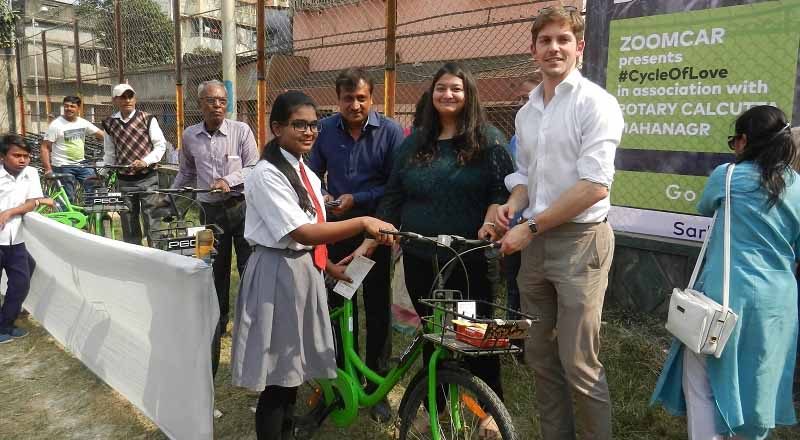 Zoomcar spread joy amongst the lesser privileged sections of the society, to mark India’s 70th Republic Day. In a campaign named #CycleofLove, the company gave away bicycles to help the lesser fortunate in their everyday commute.

The joys of life are not distributed equally amongst us all. People from the weaker strata of the society have to endure great hardships in order to simply reach their place of work, schools etc. Young boys and girls commute on foot to their schools, and so do the security guards, laundry persons, household help and others. However, this Republic Day, Zoomcar endeavoured to add a tad bit of convenience into their lives.

On January 26, Zoomcar gave away 200 bicycles each in Kolkata and Pune. The company had partnered with the Rotary Club, in order to utilise its vast network and facilitate the giveaway. Young kids from the unprivileged sections of the society, who face challenges in reaching school or accessing sanitation facilities like toilets and washrooms, received these bicycles.

Zoomcar also gave away 92 bicycles each in four different cities- Bangalore, Chennai, Pune, and Kolkata, in a contest that was hosted on 92.7 BIGFM. In order to participate, users had to simply call 92.7 BIGFM and express for who they wanted to win the bicycle and why. It may be to help a daily wage earner, manual labourer, domestic help or young kids in the neighbourhood to easily commute. The RJs listened to the reasons submitted by their listeners and selected the winners of the contest. Each winner bagged two bicycles, receiving the same within three weeks of the contest.

Greg Moran, Co-Founder & CEO of Zoomcar said, “India celebrated the 70th Republic Day this year and yet there are sections of the society for whom the daily mobility is riddled with challenges. At Zoomcar, it has been our sincere undertaking to promote effortless and cost-effective mobility solutions. Driven by the same vision, we distributed 200 bicycles in Kolkata and Pune, in addition to hosting a giveaway contest. We sincerely hope that these bicycles will help people from the economically weaker sections of the society better access basic amenities like hygiene, education, and daily mobility.”