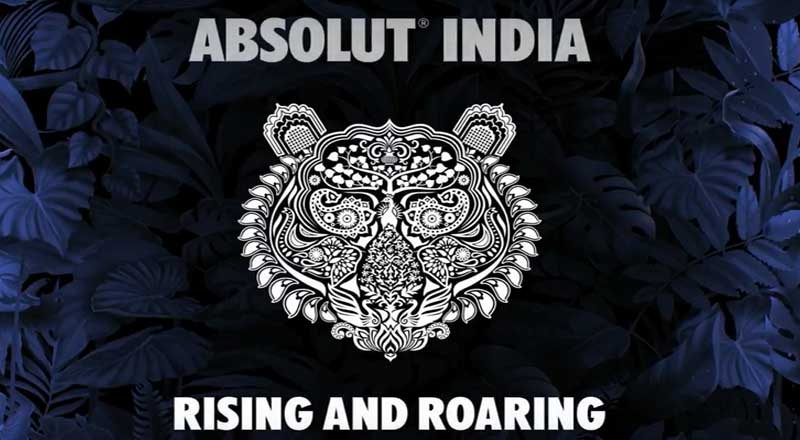 Celebrating decades of creative collaborations through art, Pernod Ricard India has introduced the second limited edition of Absolut India. With this edition the brand pays homage to India’s national animal – The Tiger. The bottle designed by artist Ajay Boga celebrates conscious conservation efforts that have made India home to 70 per cent of the world’s tiger population.
Through a crowd sourced campaign, the brand reached out to artists and the creative community to design the ‘Limited Edition’. Ajay Boga’s intricate tiger motif was selected out of twenty three hundred entries received from across the country. The motif is inspired by various Indian patterns and elements. Peacock symbolising elegance, Banyan symbolising immortality and a depiction of India’s rich ethnic diversity which is accepting and continuously adapting  – all of which comes together to form the majestic tiger. The design aims to bring together India’s rich ethnic diversity, culture, liveliness and pride that the nation holds.
Commenting on the collaboration, Kartik Mohindra, Chief Marketing Officer, Pernod Ricard India, said, “Over the years, Absolut has used art and creativity to drive positive change. With the tiger motif on the limited edition bottle we want to celebrate India in a unique manner and re-emphasize the importance of tiger.”
The artist behind the design, Ajay Boga an NID alumnus said, “Joining forces with a brand like Absolut which has always championed creativity has been a thrilling experience for me. I feel privileged to be associated with a brand which has in the past collaborated with some of the most iconic artists. The design has been inspired by the strength and courage of a tiger.”
In support of tiger conservation, Absolut is providing 180 anti-poaching camps with renewable energy for the guards to live a safer life and carry out their operations in saving the tiger and its ecosystem. Solar home lighting systems will be given to Bhadra Tiger Reserve, Nagarhole Tiger Reserve, Sariska Tiger Reserve through “The Guardbook”, an organization which support the forest guards of India.