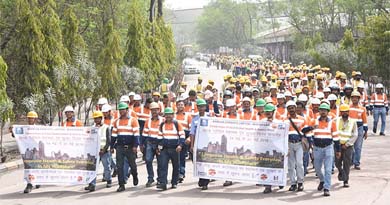 Ambuja Cements has celebrated the ‘Global Health and Safety Days 2018’, strongly reiterating its commitment to achieving ‘Zero Harm’ goal in all its operations.

Having made great strides in the Health & Safety (H&S) journey since the first exercise held in 2016 as part of its parent company Lafarge Holcim’s annual campaign, Ambuja Cement recently observed this initiative for the third consecutive year with great enthusiasm. A host of activities were organised for two weeks under the theme – ‘I improve health and safety every day in my workplace’ – which aimed at renewing the company’s focus as a learning organisation that places H&S as its foremost value and at the centre of all its operations.

Commenting on the success of the campaign, Ambuja Cement MD & CEO Ajay Kapur said, “At Ambuja, we strongly believe in ensuring a safe and healthy environment for our employees and other stakeholders including business partners and communities. Health & Safety is something we talk about and something we live. In fact, it is one of the ways we measure the quality of the work we do. Since past few years, we have been successful at shifting the safety culture in a positive direction because at every turn we had people who understood the paramount importance of keeping those around them safe, and then acted as safety Ambassadors.”

While plants focused on reviewing processes and key lessons learnt around the four main risks – mobile equipment and on-site traffic, energy isolation, working at height, and confined spaces – efforts were also made to ensure sensitisation on operational discipline and hazard identification. Similarly, offices saw activities around ergonomics, health management and much more.

Since inception, Ambuja Cement has laid a strong emphasis on H&S parameters, which has enabled the company to retain its ‘Thought Leadership’ position in this space. While all its plants have been certified by the internationally recognised Occupational Health and Safety Assessment Series 18001 (officially known as OHSAS 18001), the company has over the years implemented various pioneering initiatives that stood out in the industry.