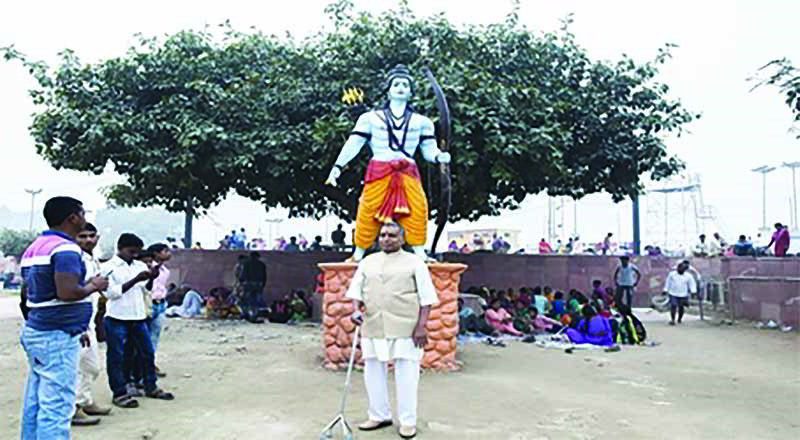 For more than a decade, Triloki Nath Pandey continued sitiing in the courtrooms, representing a Hindu God . In court papers, Triloki Nath Pandey is described as the “next friend” of the infant Lord Ram. The deity was one of the litigants in the long-running dispute over a plot of land in the northern Indian temple town of Ayodhya, which was decided in his favour by the Supreme Court..

The law must stand apart from political contestations over history, ideology and religion. For a case replete with references to archaeological foundations, we must remember that it is the law which provides the edifice upon which our multicultural society rests.

The actual dispute is over immovable property. The court does not decide title on the basis of faith or belief but on the basis of evidence. The law provides us with parameters as clear but as profound as ownership and possession. In deciding title to the disputed property, the court applies settled principles of evidence to adjudicate upon which party has established a claim to the immovable property.

There is clear evidence to indicate that the worship by the Hindus in the outer courtyard continued unimpeded in spite of the setting up of a grill-brick wall in 1857. Their possession of the outer courtyard stands established together with the incidents attaching to their control over it.

As regards the inner courtyard, there is evidence on a preponderance of probabilities to establish worship by the Hindus prior to the annexation of Oudh by the British in 1857. The Muslims have offered no evidence to indicate that they were in exclusive possession of the inner structure prior to 1857 since the date of the construction in the sixteenth century. After the setting up of the grill-brick wall, the structure of the mosque continued to exist and there is evidence to indicate that namaz was offered within its precincts.

The report of the Waqf inspector of December 1949 indicates that Muslims were being obstructed in free and unimpeded access to mosque for the purposes of offering namaz. However, there is evidence to show that namaz was offered in the structure of the mosque and the last Friday namaz was on December 16, 1949. The exclusion of the Muslims from worship and possession took place on the intervening night between 22/23 December, 1949 when the mosque was desecrated by the installation of Hindu idols. The ouster of the Muslims on that occasion was not through any lawful authority but through an act, which was calculated to deprive them of their place of worship. During the pendency of the suits, the entire structure of the mosque was brought down in a calculated act of destroying a place of public worship. The Muslims have been wrongly deprived of a mosque, which had been constructed well over 450 years ago.

This exercise, and the consequent handing over of the land to the Sunni Central Waqf Board, shall be conducted simultaneously with the handing over of the disputed site comprising of the inner and outer courtyards as a consequence of the decree in Suit 5. Suit 4 shall stand decreed in the above terms. Section 6 of the Acquisition of Certain Area at Ayodhya Act 1993 empowers the Central Government to direct that the right, title and in­t­erest in relation to the area or any part thereof, instead of cont­i­nuing to vest in the Central Government shall vest in the au­thority or body or trustees of any trust which is willing to co­mply with the terms and conditions as government may impose.

In Box: In a unanimous verdict, a five-judge Constitution Bench of the Supreme Court on Saturday gave the ownership of the disputed 2.77-acre land in Ayodhya to a group representing Hindus. The Supreme Court directed that 5 acres of alternative land be provided to a Muslim group that had staked claim to the disputed site.

The Supreme Court has delivered its verdict on the Ram Janmabhoomi–Babri Masjid land dispute in Ayodhya, marking another chapter in a centuries-old religious dispute that is the country’s most politically divisive row.

The case, which has spanned centuries of religious history and languished in the legal system for almost seven decades, has finally seen a closure, as a five-judge Constitution Bench headed by Chief Justice Ranjan Gogoi pronounced its verdict. In a unanimous judgment, the Bench led by Chief Justice of India Ranjan Gogoi has ordered that a temple must be constructed at the disputed site and the Muslims must be compensated with five acres of land at a prominent place in Ayodhya. The court also ordered the Central government to formulate a scheme within three months to implement this order.

Thousands of paramilitary force members and police have been deployed in Ayodhya, where the Babri Masjid mosque was razed in 1992 by hardline Hindus who believe the site is the birthplace of Lord Ram.

We have already concluded that the three-way bifurcation by the High Court was legally unsustainable.

Suit 5 (which was brought before civil judge, Faizabad by the deity (Bhagwan Shri Ram Virajman) and the birth-place (Asthan Shri Ram Janam Bhumi, Ayodhya), by the next friend for a declaration of title to the disputed premises and to restrain the defendants from interfering with or raising any objection to the construction of a temple) — has been held to be maintainable at the behest of the first plaintiff (the deity of Lord Ram) who is a juristic person. The third plaintiff (next friend) has been held to be entitled to represent the first plaintiff.

We are of the view that on the one hand, a decree must ensue in Suit 5, Suit 4 (which was instituted on 18 December 1961 by the Sunni Central Waqf Board and nine Muslim residents of Ayodhya. It has been averred that the suit has been instituted on behalf of the entire Muslim community together with an application under Order) must also be partly decreed by directing the allotment of alternate land to the Mu­slims for the construction of a mosque and associated activities. The al­lotment of land to the Muslims is necessary because though on a balance of probabilities, the evidence in respect of the possessory claim of the Hindus to the composite whole of the disputed property stands on a better footing than the evidence adduced by the Muslims, the Muslims were dispossessed upon the desecration of the mosque on 22/23 December 1949, which was ultimately destroyed on 6 December 1992. There was no abandonment of the mosque by the Muslims.

This Court in the exercise of its powers under Article 142 of the Constitution must ensure that a wrong committed must be remedied. Justice would not prevail if the Court were to overlook the entitlement of the Muslims . The area of the composite site admeasures about 1,500 square yards. While determining the area of land to be allotted, it is necessary to provide restitution to the Muslim community for the unlawful destruction of their place of worship.