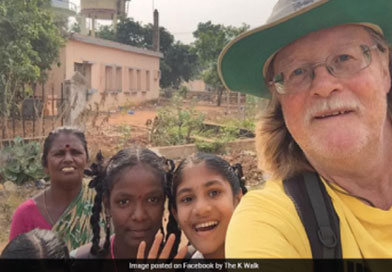 Baddeley carefully documented his journey on Facebook and the page offers a lovely insight into everyday life in India.

Baddeley was walking to raise money for Future Hope, a charity based in Kolkata, which provides shelter and schooling for street children. He managed to raise 11,757 British pounds (close to 10 lakh rupees) from 124 donors on the fundraising platform JustGiving. He exceeded his original target of 10,000 pounds (a little over 8 lakh rupees). The walk, dubbed K-walk, was dedicated to the memory of his late daughter Katie.

“I first went to India as a long-haired student in 1973. Thus began a love affair that has continued to this day,” wrote Baddeley on his fundraising page. “I retired at the end of 2015 and for several years had been hatching a plan to do a long walk in India in order to raise funds for Future Hope.”