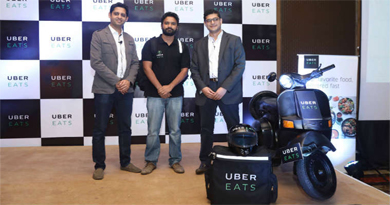 Uber has launched the UberEATS service to Delhi, NCR starting with Gurugram. Partnering with over 300 restaurants, consumers can now order their favourite food at the tap of a button. To successfully scale the business across the region, Faiz Abdulla has been appointed as the General Manager for UberEATS in Delhi.

Commenting on the launch, Bhavik Rathod, Head of UberEATS India, said, “UberEATS has received an overwhelming response from Mumbaikars and we recently expanded operations to serve entire city. As a step further in our global expansion strategy, we aim to open up the diverse range of culinary experiences and cuisines to Delhiites at the push of a button. Our goal is to offer people what they want to eat, when they want to eat, in the quickest time possible. The ease and reliability of Uber’s technology is making this a reality.”

UberEATS will give local restaurants in Delhi, NCR a reliable delivery option, effectively expanding their capacity and reach to be able to service a whole new network of potential customers. In addition to that, hundreds of delivery partners in the region will now also have access to more flexible earning opportunities.

“Delhi, well known for its love for North Indian and international cuisines, has a vibrant food culture, and UberEATS will offer Delhiites an effortless way to order food. We are excited about going live in Gurugram today and aim to expand the service area to New Delhi and other parts of the National Capital Region soon.” said Faiz Abdulla, General Manager for UberEATS Delhi.

UberEATS was started in 2014 as a small delivery pilot in Los Angeles and launched as a separate application in Toronto in December 2015. In the past 18 months, it has grown incredibly fast, and is now a stand-alone app available in 27 countries and in 97 cities around the globe, including India.

The UberEATS app is separate to the Uber app people use to request a ride and has been built specifically to make food delivery as seamless as possible. Starting today, consumers can download the new app for iOS and Android from the iTunes/Google play store or go online at ubereats.com.