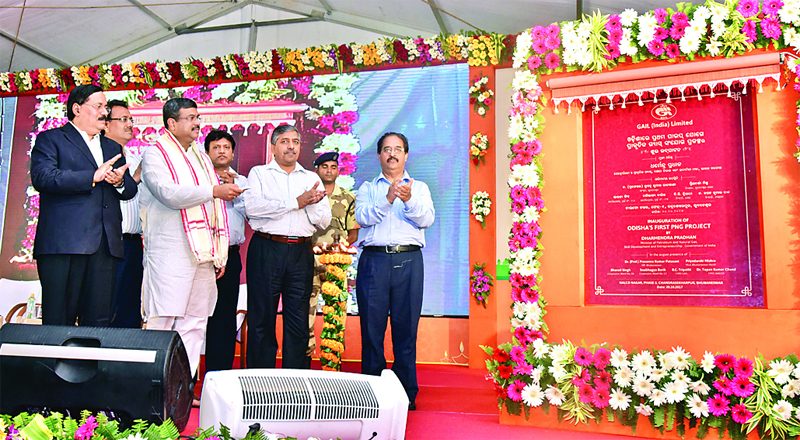 Shri Dharmendra Pradhan, Minister for Petroleum & Natural Gas and Skill Development & Entrepreneurship has launched supply of Piped Natural Gas (PNG) for the residents of Bhubaneswar yesterday. With this, GAIL started supply of environment-friendly PNG to 255 houses in Nalco Nagar located at Chandrasekharpur area. NALCO officer Shri Jatindra Nayak and his wife Smt. Binapani Nayak received the 1st PNG connection being the beneficiary of commencement of the first phase of City Gas Distribution (CGD) project in Bhubaneswar.

After completion of the project there will be no hassles of booking and storing cylinders as gas is continuously supplied through pipes and payment is done after usage on the basis of meter reading. Moreover, in the unlikely incident of leakage, the gas quickly rises and disperses in the atmosphere without causing damage.

Expressing happiness at the fast pace of work, the Hon’ble Minister lauded GAIL for the early commencement of this 1st phase of supply of PNG in Bhubaneswar which was earlier expected to be completed by March 2018. He said GAIL took up the project on a war-footing and commenced supply of natural gas almost six months before the deadline.

Commenting on the same Shri Pradhan said, “The commencement of supply of natural gas is an important step towards the fulfillment of Prime Minister Shri Narendra Modi’s dream of developing a gas-based economy and linking Eastern India to the country’s Natural Gas Grid through the ‘Pradhan Mantri Urja Ganga’, which will pass through five states, i.e. Uttar Pradesh, Bihar, Jharkhand, Odisha and West Bengal. The longest stretch of the project is 769 kms and will be built in Odisha. This pipeline will lead to industrial development of eastern India.”

Initially, natural gas will reach Bhubaneswar in special containers called “cascades” which will be transported by road from Vijaywada in Andhra Pradesh. Later, natural gas will be supplied through the Jagdishpur – Haldia & Bokaro – Dhamra Natural Gas Pipeline (JHBDPL). The pipeline is presently under construction and likely to be completed by 2019.

In Bhubaneswar, construction activities of CNG stations have already been taken up at Chandrasekharpur, Patia, Khandagiri and Tamando, and supply will be commenced at the earliest. The overall capital expenditure for the Bhubaneswar and Cuttack CGD projects will be Rs. 1,700 crores, of which Rs 400 crores will be spent in the next three to five years.