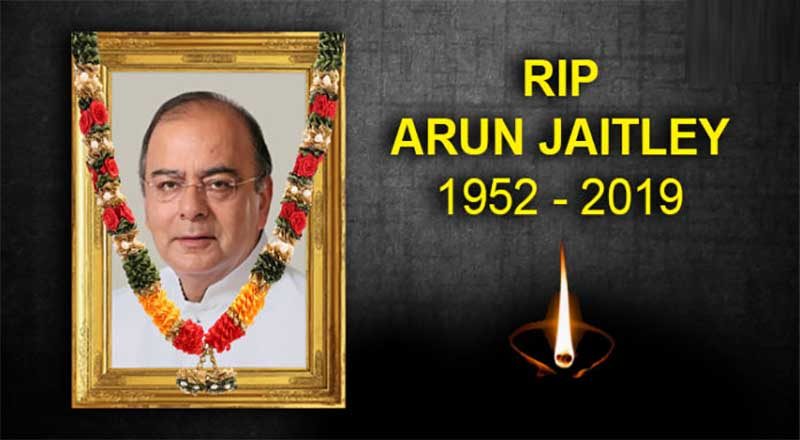 Former Finance Minister and BJP veteran who died on Saturday, was cremated with state honours in Delhi this afternoon. Cutting across party lines, a number of political leaders paid their respects to him and attended the funeral. The 66-year-old died shortly after noon yesterday at Delhi’s premier All India Institute of Medical Sciences, where he had been admitted for two weeks.

Most of the union ministers, with whom Mr Jaitley had served in the first term of PM Modi’s government, attended the funeral. Besides, Delhi Chief Minister Arvind Kejriwal, his deputy Manish Sisodia, Congress’s Jyotiraditya Scindia and Mr Jaitley’s one-time opponent in court-room, Kapil Sibal, were present.

Prime Minister Narendra Modi, who is abroad, missed the funeral. He offered to come back yesterday, but was dissuaded by Mr Jaitley’s family in view of his engagements. PM Modi is attending the G7 summit in France today after his visit to Bahrain.

One of the most trusted ministers of PM Modi, Mr Jaitley was acknowledged as the ultimate backroom strategist and a key troubleshooter of the party. As a minister, he had steered major economic legislation, including the flagship Goods and Services Tax, and defended controversial government policies.

Ailing for several years, Mr Jaitley had requested PM Modi to be allowed time to recuperate before taking any fresh responsibility, when the BJP won a second term in power in May.

The lawyer-turned-politician had triple heart bypass surgery when he was 52. A diabetic, his health had worsened after he underwent a kidney transplant in May last year. In February, he had to skip the presentation of the interim budget as he was in the United States for treatment.

In Box: PM Modi – who visited Mr Jaitley at AIIMS before leaving the country – turned emotional after the news of Mr Jaitley’s death. “I can’t imagine that I am so far here while my friend has gone away. Some days ago, we lost our former External Affairs Minister behen Sushma ji. Today, I have lost my friend Arun,” he said.

In New Delhi, Arun Jaitley continued building Narendra Modi’s image as a development man. He had started preparing a ground for Narendra Modi’s national acceptance as early as 2007, when in one of the informal talks with journalists – including this writer, Arun Jaitley declared, “The biggest strength of Narendra Modi is his brain and decisiveness.”

In due course, when LK Advani failed to take the BJP to victory in 2009 Lok Sabha election, a search for next-age leader began in the BJP-RSS family. Arun Jaitley played a key role in Narendra Modi coming in the scheme of things.

He ensured that the RSS and Narendra Modi were in sync. This was significant given the strained relationship between the two during Narendra Modi’s Gujarat days. He is said to have kept the RSS leaders at an arm’s distance during his chief ministership.

When the BJP leaders congregated in Goa in September 2013 to name its prime ministerial candidate for 2014, Narendra Modi was not a unanimous choice.