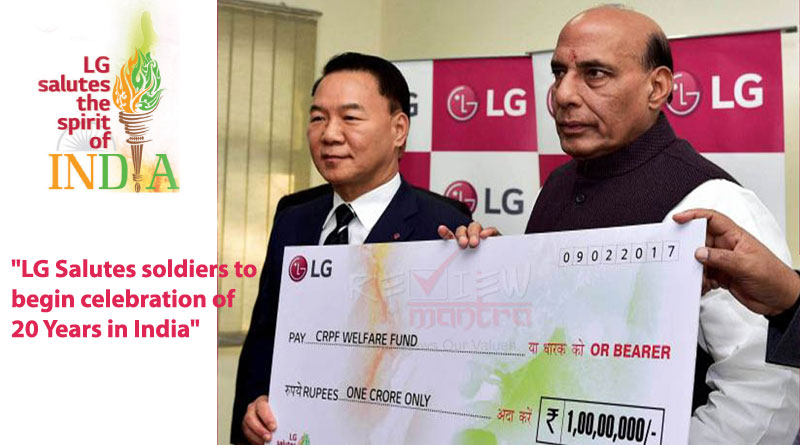 Nation’s consumer durable major, LG Electronics initiative to thank the Indian Forces, with A consumer connect campaign to wish the Soldiers by Indian Citizensby contributing to the Indian Defence Welfare Fund ( CRPF),with the launch of the #KarSalaam initiative is a commitment to LG’s corporate philosophy of ‘Life’s Good’ and a gesture of their support and solidarity to our nation’s soldiers for playing a great role in assuring that we lead a fearless and good life in this country.

The 20th Anniversary celebrations kick-started with LG’s #KarSalaam initiative dedicated to Indian soldiers, was launched prior to Republic day. The campaign invited the whole nation to come forward and send their wishes to the Indian Armed Forces. Through this initiative, LG salutes the soldiers’ spirit of magnanimous contribution and service towards the nation.

About this campaign all Indians were invited to post their wishes for soldiers on www.karsalaam.in . LG will be contributing a certain amount on every LG product purchased till 26th January towards the ‘CRPF Welfare Fund’, which is dedicated to the welfare of soldiers. Where, LG also seeks participation from the families of the soldiers to send their heart-warming messages to their near and dear ones who brave all odds to protect our country.

Through this initiave, LG is saluting the soldiers’ spirit of selfless contribution and service towards the country. LG is committed to walk the extra mile, providing a good life to the citizens of India. Accordingly, the company will extend their support and solidarity to our soldiers who play a great role in ensuring that we lead a fearless and good life in this country.

LG rolled out this campaign through radio, digital, outdoor and mall activities to capture the messages and wishes of the citizens of India for our soldiers. The company also engaged the people through social media platforms and encouraged them to share their wishes on the microsite www.karsalaam.in, where more than 40,092 on-line wishes and 1,93,000 offline wishes written by citizens of the country were collected from all across the country.

Taking this campaign forward, LG India’s MD Kim Ki Wan handed over a cheque of Rs 1 Crore to the home minister Rajnath Singh for ‘CRPF welfare fund’, which is dedicated to the soldiers.

Rajnath Singh, minister, home affairs, government of India said, “We welcome LG Electronics’s gesture of showing solidarity to Indian Armed Forces; this is a very special gesture by a corporate. Today the entire nation is proud of its armed forces and response to this initiative in form of collecting good wishes for soldiers is an indication for the same. I would like to thank the people of India for extending their support to the armed forces.”

Kim Ki Wan, managing director, LG Electronics India said, “LG salutes the spirit of Indian soldiers who courageously give up their lives to protect the country. Therefore, we took this initiative to bring together the citizens of India to express their gratitude to our soldiers. With an aim to connect with the hearts of the entire nation and to pour out messages for these brave hearts, LG goes beyond boundaries to reach out to every citizen and invite them to express their gratitude for our soldiers who selflessly volunteer to serve our nation all day and night.”