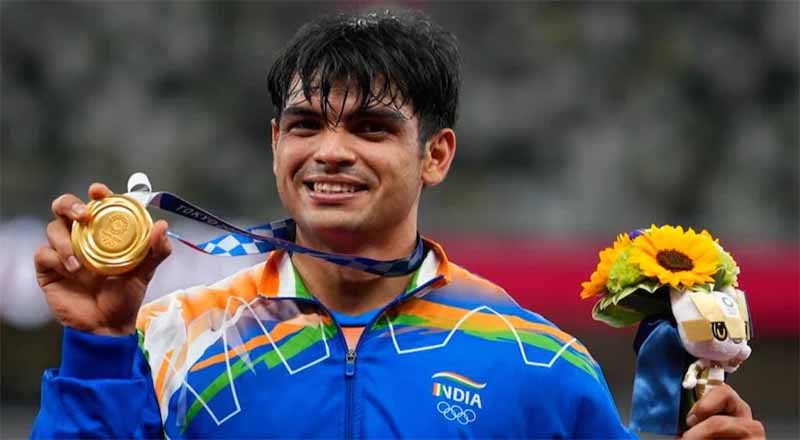 India’s first individual Olympic gold medallist Neeraj Chopra gave his golden had to all Indians for winning the gold medal in athletics at the Tokyo 2020 Olympic Games saturday.A nation of a billion-plus was awaiting a historic medal with bated breath, knowing it is well within the country’s reach — an unprecedented feeling when it comes to track and field events at the Tokyo Games.

Neeraj Chopra won the men’s javelin with best throw of 87.58 meters, claiming a historic first Olympic gold in athletics for India. His biggest rival, Johannes Vetter, was out in the first round of the finals.

Prime Minister @narendramodi speaks to Neeraj Chopra; congratulates on winning Gold medal at Tokyo Olympics. PM Modi says, history has been scripted at Tokyo and what Neeraj Chopra has achieved will be remembered forever.

Neeraj Chopra threw the javelin 87.03m in his first throw and bettered it with 87.58m but couldn’t go any further. Chopra managed four legitimate throws of 87.03m, 87.58m, 76.79m and 84.24 while his fourth and fifth throws were disqualified but his second throw was way better than the rest and enough to secure the gold for India.

Neeraj Chopra’s gold medal is only the second for India in individual category after Abhinav Bindra, who bagged the top prize in the 19m Air Rifle shooting event in China

Neeraj dominated the javelin final just like he did in the qualification round when he threw the javelin 86.65m to qualify for the final with his first threw.

Neeraj has allowed expectations to hit the roof. He has done it in the past and the absence of Poland’s Marcin Krukowski and the reigning world champion Keshorn Walcott and Rio Olympics silver medalist Julius Yego puts Neeraj among the favourites.