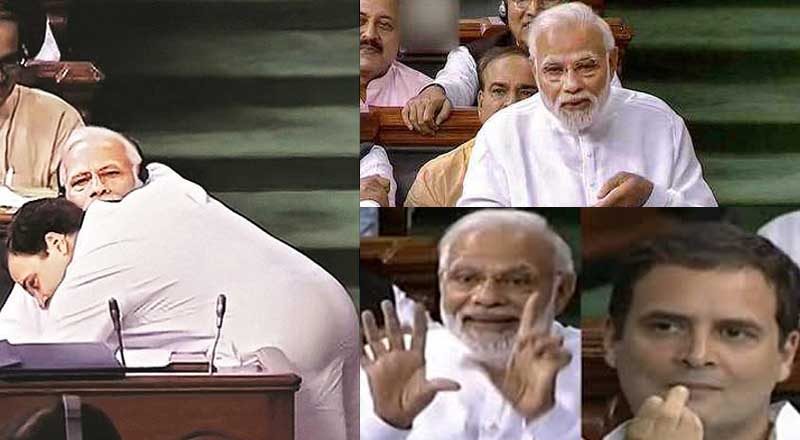 Sets the ball rolling for the 2019 General Elections, giving a clear indication of who is pitted against whom

Amidst high drama and in what appeared to be a face-off between PM Narendra Modi and UPA Chairperson Rahul Gandhi, a no-confidence motion moved by the Opposition to expose the current government’s doings got defeated, even as NDA sailed through with 325 trust votes.

The National Democratic Alliance (NDA) won over a two-thirds majority in the Lok Sabha, defeating a no–confidence motion initiated by the BJP’s erstwhile partner in the NDA, the Telugu Desam Party. TDP has accused the government of reneging on the promise of special category status to Andhra Pradesh after the state divided in 2014.

Ultimately, this no–confidence motion appears to have set the stage up for the 2019 elections for PM Narendra Modi, acting in his favour.

The government has secured 325 votes of the 451 members present after the 12-hour long debate.

The no-confidence motion however held no threat to the Modi government, which has a clear majority in the powerful 545-member lower house of parliament, controlling more than 300 seats. In a House of 533 members, the ruling National Democratic Alliance (NDA) has 313 MPs, including 274 (including the speaker) of the BJP, 18 of the Shiv Sena, six of the Lok Janshakti Party (LJP) and four of the Shiromani Akali Dal (SAD).

The stated strength of the Opposition in the Lower House on the other hand is 222, including 63 MPs of the Congress-led UPA, 37 of the AIADMK, 34 of the Trinamool Congress (TMC), 20 of the Biju Janata Dal (BJD), 16 of the Telugu Desam Party (TDP) and 11 of the Telangana Rashtra Samithi (TRS).

In the first no-confidence motion in parliament in 15 years, 39 MPs spoke but all eyes were on the face-off that took place between Rahul Gandhi and PM Narendra Modi.

Rahul launched a scathing attack on Modi on various topics like Rafale deal, Jumla Strike, job opportunities, recovery of black money, silence on violence and on farm loan waivers. Rahul Gandhi accused the government of creating only 400,000 new jobs against the 20 million promised in a year. He accused Modi of favouring big business houses in defence and business deals at the expense of poor people.

At the end of his speech, Rahul may have got inspired from the movie Munna Bhai M.B.B.S as he gave a “Jadu-ki-jhappi” to the PM (startling the latter as it appeared) and then winking at his party’s MPs. This was apparently a display of his nonviolence values towards Modi, as Rahul said in his speech that ‘he will take hatred out of him (Modi) and turn it into love’.

Modi, in his defense denied Gandhi’s allegations on the Rafale deal and gave him a mild rebuke for behaving like a child. On the allegations about job opportunities, he pointed out that in the past one year 1 cr jobs have been created. He also claimed that the fight against black money is still going on. In the course of Rahul’s speech, he said that Modi did not look him in the eye, to which Modi replied that he is from a poor background and from a backward caste and that he is nothing in front of the Gandhi family. He then pointed out names from history like Sardar Patel, Subhash Chandra Bose, Morarji Desai etc, who the BJP believes had faced the wrath for having directly taken on the Nehru-Gandhi family.

Targeting the coalition that is being built to take him on in 2019, he pointed out that the Congress has a track record of betraying allies, as it had done in 1979, 1991, and 1997 leading to short-lived governments and creating instability.

Rebuking Gandhi for his alleging the government in the Rafale deal, Modi said, “I can’t imagine truth being twisted like this on issues related to National security. On a statement made here, two governments had to issue a condemnation. I want to assure the country that the deal is between two governments, and is fully transparent.”

In his speech, Modi accused the Congress of conspiring to incite instability in the country by supporting a pointless no-confidence motion, and suggested that the result of the 2019 Lok Sabha polls was a foregone conclusion as he advised his opponents to try their luck with another no-confidence motion in 2024.

What is a Motion of no-confidence?

A motion of no-confidence is a statement or vote which states that a person in a position of responsibility is no longer deemed fit to hold that position, perhaps because they are inadequate in some respect, are failing to carry out obligations, or are making decisions that other members feel detrimental.

If a vote of confidence is called, the Parliament will decide whether it has confidence in the present Government or not. If the vote fails the Government is said to have lost its majority and can no longer govern. Acharya Kripalani moved the first-ever no confidence motion on the floor of the Lok Sabha in August 1963, immediately after the disastrous India–China War. Vajpayee is the only person to have moved two no-confidence motions in 1967 & 1992 but faced one in 2003.