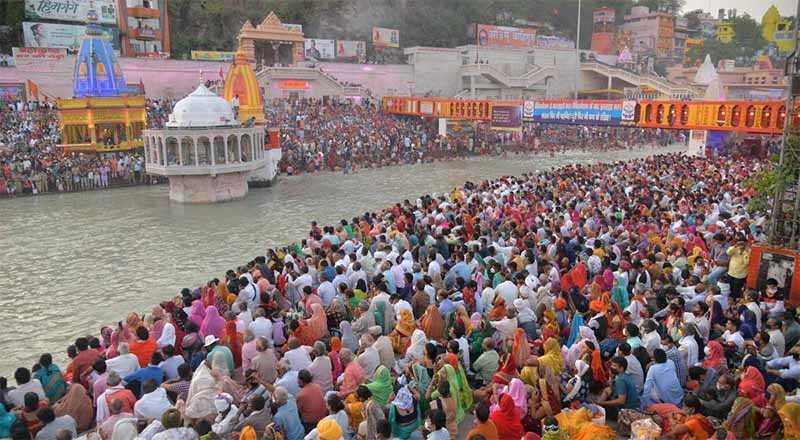 A data was released by Kumbh Mela Force on April 29 which revealed that around 9.1 million people attended the Mahakumbh this year despite rising covid cases in the country.Massive crowd had participated in the religious gathering turning it into a ‘super spreader event’ of Covid19. Covid norms and protocols were not followed by not wearing any masks and maintaining social distancing with such a huge crowd is impossible, resulting in an alarming surge of cases.

It is really shocking that, Kumbh 2021 was allowed even when the second wave of coronavirus was at its peak. The fair, which coincided with the worst surge in Covid-19 cases that has overwhelmed hospitals and triggered a shortage of medical oxygen, medicines, and beds, will end on Friday.

A bulk of over 9.1 million pilgrims, who visited Haridwar for the Mahakumbh from January, arrived in the holy city this month even as the mega fair was curtailed from four months to one month and held in April due to the Covid-19 pandemic, according to Kumbh Mela Force data.

Mahakumbh, which is held once every 12 years, traditionally starts in January with the first festive bath on Makar Sankranti (January 14). It concludes towards the end of April with the last Shahi Snan (holy dip) in the Ganga on Chaitra Poornima. Because of the Covid situation, the state government curtailed the Mahakumbh.

As many as 1.3 million pilgrims gathered in Haridwar for another bath on Mesh Sankranti-Baisakhi (April 14). The number was devotees was comparatively lesser than for earlier Shahi Snans due to the spike in Covid-19 cases and strict implementation of norms.

Dr. Sanjay Shah who is vice president of the Association of Physician of India, Uttarakhand Chapter expressed his concerns over the case surge due to Kumbh 2021. He said, “Covid19 positive cases have risen sharply in Haridwar with back-to-back Shahi snans in mid-April which witnessed over 4 million pilgrims influx in a span of just two days. Testing and tracing need to be carried out at a large level now.

After  everything gets over, the curfew has been ordered in Uttarakhand’s Haridwar from Wednesday (April 28) after the last ‘Shahi Snan’ of the Kumbh Mela got over. Only essential services will be allowed in the urban areas of Haridwar, Roorkee, Laksar and Bhagwanpur for the duration of the ‘corona curfew’ that will be in place from tomorrow till 5 am of 3rd May.