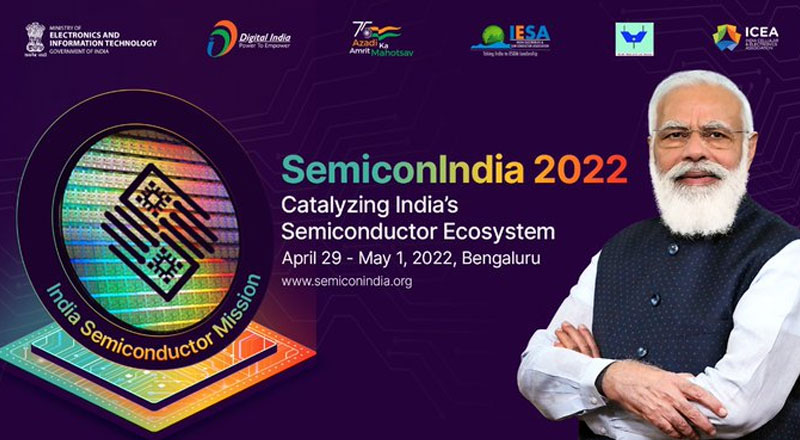 The Prime Minister, Shri Narendra Modi inaugurated Semicon India Conference 2022 and shared his remarks via video conferencing at the inaugural session today. Union Ministers, leaders of the Semiconductor industry, investors, academics and members of the diplomatic corps were among those present on the occasion.

At the outset, the Prime Minister welcomed all and expressed happiness that the conference is taking place in India. He underlined the critical role of semiconductors in today’s world and said “it is our collective aim to establish India as one of the key partners in global semiconductor supply chains. We want to work in this direction based on the principle of Hi-tech, high quality and high reliability.”

The Prime Minister underlined six reasons for India being an attractive investment destination for Semiconductor technologies.

First, India is building a digital infrastructure to connect over 1.3 billion Indians. Describing the strides that India has recently made in the field of financial inclusion, banking and digital payment revolution, the Prime Minister said “we are using digital technology to transform lives in all sectors of governance from health and welfare to inclusion and empowerment.”

Second, the Prime Minister said, with steps like connecting six hundred thousand villages with broadband investment in developing capabilities in 5G, IoT and clean energy technologies, India is paving the way to lead the next technology revolution.

Fourth, India has undertaken wide-ranging reforms for improving the ease of doing business in India. The Prime Minister informed about measures like the abolition of more than 25,000 compliances, a push towards auto-renewal of licenses, transparency and speed in regulatory framework via digitization and one of the most favourable taxation structures in the world.

Sixth, the Prime Minister said that India has undertaken several measures towards transforming the Indian manufacturing sector. “At a time when humanity was fighting a once in a century pandemic, India was not only improving the health of our people but also the health of our economy”, he said. Prime Minister Modi talked about ”Production Linked Incentives” schemes that offer incentives of over 26 Billion Dollars in 14 key sectors. Over the next 5 years, the electronics manufacturing sector is expected to see record growth, he informed. Shri Modi also told the audience about the recently announced Semi-con India Programme with a total outlay of over 10 billion dollars. This program aims to provide financial support to companies investing in semiconductors, display manufacturing and design ecosystems.

The Prime Minister acknowledged the need for government support and assured the audience of the best efforts of the government to provide a conducive environment for business. “While the industry works hard, the government must work even harder”, he said.
Noting the formation of the new world order, the Prime Minister asked to seize the opportunity that is emerging. “We have worked hard over the last few years to create an environment that encourages growth. India has an appetite for tech and risk-taking. We have put the odds in your favour as far as possible through a supportive policy environment. We have shown that India means business”, the Prime Minister concluded.