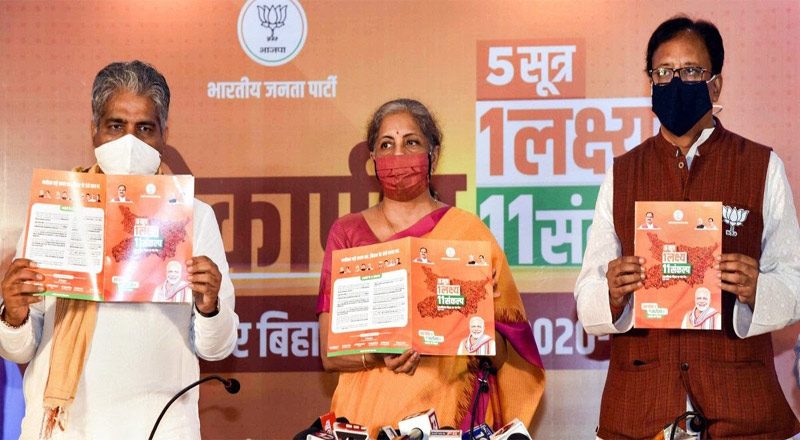 BJP’s ‘Free COVID Vaccine for Votes’ Offer for bihar raises concerns of health policy, it is highly politized. Vote for vaccination is absolutely a wrong politics. What exactly is the issue, a common people not able to understand.

The announcement by Nirmala Sitharaman of a free COVID-19 vaccine over 10 crore population of Bihar as part of its election manifesto, and the Opposition deriding this as ‘vaccine politics’. The State is headed for three-phase Assembly polls from October 28. Experts says, if the vaccination is ready, then why they want people to suffer and die from the COVID-19. It seems high level of politics on the live saving vaccinations.

Bharatiya Janata Party’s manifesto in Bihar, ahead of the assembly polls raises many questions. If the party is elected to power in the state, it will arrange for free COVID-19 vaccines. A question is on if the party will not come to power, will the party will not bring the vaccinations? It is hard to overstate how appalling this promise is, assuming it will be fulfilled.

A question arises on does this mean that if the voters of Bihar reject the BJP in the election, they will not be given free COVID-19 vaccinations? And does it mean that people in other states will not be given their vaccines free? And how does this announcement, made by the Union finance minister on behalf of her party, square with the model code of conduct, which prohibits the announcement of new government policies and initiatives once the election process begins?

On the heels of the BJP, one of its supporters, the AIADMK government in Tamil Nadu, offered to administer the vaccine to all, again free of cost. The State will go to elections in May. At Pudukottai, after a review meeting with officials on Covid-19 preventive measures, Chief Minister Edappadi K Palaniswami said that “The State government will bear the entire expenses.” The State has a population of 7.25 crore.

The Union government has set aside about Rs 500 billion ($7 billion) to distribute the vaccination at the cheapest possible price in the world’s second-most populous after China, Earlier, as part of the Covid-19 vaccine preparedness discussions, the Health Ministry had promised the States that it would procure vaccines for all and distribute them, and did not want them getting into a race for the antidote.

The principal Opposition party in Bihar, the Rashtriya Janata Dal (RJD), said a Covid vaccine belongs to the country, not to the BJP. The political use of a vaccine shows that the BJP has no choice but to sell the fear of disease and death. All Biharis are self-respecting, they will not sell their children’s future for money,” the party said.

Former Congress president Rahul Gandhi ridiculed the Finance Minister’s statement, saying the Centre just announced India’s Covid access strategy. “Kindly refer to the State-wise election schedule to know when you will get it, along with a hoard of false promises,” he said.

With an estimate of six to seven dollars per person, the Narendra Modi administration has already provisioned money for the current financial year and the government has said that there will be no shortage of funds in this regard, a Bloomberg report stated

“There announcements are mere gimmicks. I don’t think any State will be able to vaccinate the whole population in 2021,” said Ommen C Kurian, Senior Fellow at the New Delhi-based Observer Research Foundation.