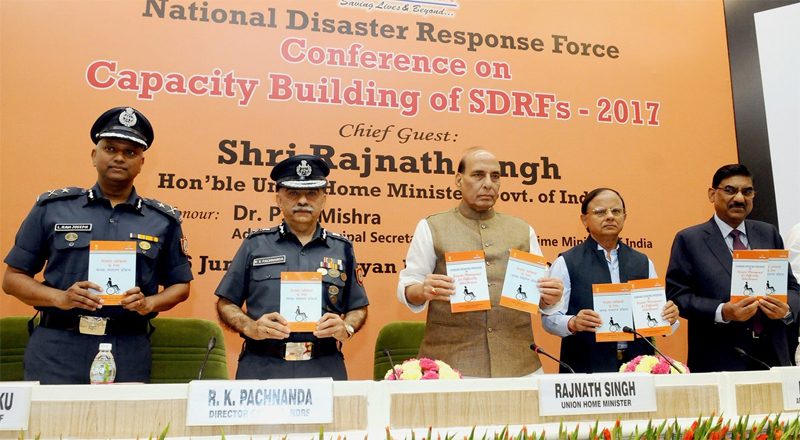 The Union Home Minister Shri Rajnath Singh has inaugurated the 2-day National Level Conference on “Capacity Building of SDRFs-2017”. The conference, organised by National Disaster Response Force (NDRF) aims to develop synergies between the responses of National & State Disaster Response Forces (SDRFs) and to highlight way ahead to strengthen the response capabilities of SDRFs.

Speaking on the occasion, Shri Rajnath Singh said that disaster has no geographical and physical boundaries, so effective management of disasters beyond boundaries should be planned. “The places which were considered secured till now, are also facing threat of disasters due to increasing population and urbanisation. The primary responsibility to deal with disasters lies with the states, so the States should be prepared in advance to mitigate the risk related to disasters and take the necessary action. There is a need to strengthen SDRFs by specialized training and equipping with latest gadgets and tools, improving bilateral and regional cooperation among states so that States can help each other at the time of disaster.”

HE further stated said that the focus has now shifted from disaster management to disaster resilience and said that the funds allocated to SDRFs have increased from Rs 33,581 crore during 2010-15 to Rs 61,220 crore during the period 2015-20, thereby registering an increase of 82%. He also said that 2 additional NDRF battalions have been raised in Varanasi and Arunachal Pradesh to strengthen its infrastructure.

Addressing the gathering, Dr. P. K. Mishra, Additional Principal Secretary to the Prime Minister, said that it is for the first time in the last few years that, such a national level conference is being organised with the participation of most of the States. “NDRF is not like any other force in the country, as it undertakes many exercises like mock drill, capacity building, community awareness programs, school safety programme, etc. The focus of NDRF is on three aspects – specialized training for search and rescue, capacity building of other agencies and preparedness.”

As a special initiative for boosting the confidence and skills of the students, NDRF conducted various mock drills and school safety programmes in the last one month in all Kendriya Vidyalaya Sangathan Schools of Delhi & NCR and other parts of the country. Under this campaign, Inter- School Safety Mock Drill competition, and Inter School – Open Essay competition on “How will I respond in case of an earthquake” were organized.

A film ‘The Incredibles’ was also shown during the conference, to showcase the operations carried out by NDRF personnel during disasters like earthquake, floods, etc.