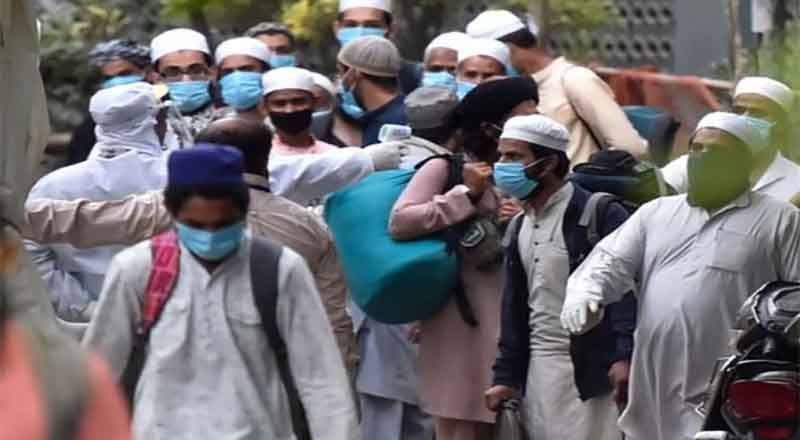 A religious congregation at Nizamuddin area  in Delhi has turned out to be a COVID-19 hotspot , triggered to a global controversy on why the maulana was misguiding the pilgrims and what was his intention behind this ,weather any criminal conspiracy was behind this , it becomes a million dollar questions in the mind of every Indian citizen .

When there is complete lockdown, who had given the permission for the congregation, an annual event organised by an Islamic missionary movement called Tablighi Jamaat, had attracted around 8,000 people, including many from overseas, to the movement’s headquarters, Nizamuddin Markaz was stayed in 16 mosques in Delhi. Another question comes on what our intelligence were doing ?

There will be too many cruel and unfair stories like this one. CoVID-19 doesn’t discriminate based on what you do or who you are. To address the pandemic, Government of India (GoI) has enforced a total shutdown in the country due to the unprecedented crisis brought upon by COVID-19.

A question comes on why the Muslims were defying Curfew instructions in India..

In Box: How stupidity it is to hear, there is no need for precautions, 5 times Namaz daily can save us from Coronavirus: Crowd outside Mosque

At a time when the rest of the world is avoiding leaving home in the current outbreak of coronavirus, few Muslim people are adamant that they will continue to do Salah in the crowd. While people are avoiding crowded places amid the coronavirus fears, a large number of people are gathering at Jama Masjid in Delhi.

Unfortunately, for now, there is no vaccination or cure available to help patients recover the deadly disease. Scientists are trying their best to find a complete cure to combat the fast-spreading disease. People outside Jama Masjid, on the other hand, believe that Allah’s grace can treat the disease.

Talking to News 24, Muslim people said that we need not be afraid of COVID-19 because we have faith in Allah and he will never let us be infected with the virus. As long as there is god to protect us, no disease can harm us, they said.

Prime Minister Narendra Modi has urged every citizens of the country to avoid social gatherings as part of precautionary measures to contain coronavirus outbreak, but people outside Jama Masjid believe that Allah is always there to protect them from the epidemic. They say that we do not believe in rumors, we put our trust in Allah.

When asked why they do not perform prayers at home, they claimed that Islam does not allow them to perform Salah from home.

Thousands remained stranded at the Markaz (centre), heightening the risk of infections spreading. The Delhi government has now sealed the Markaz and evacuated over 1,000 people. Of these, more than 300 have been sent to various hospitals, while around 700 have been moved to quarantine facilities. Twenty-four cases from the centre were found to be positive for COVID-19.

Many experts are thinking, and expressed concerns over potential vilification of one community as being primarily responsible for community transmission of the coronavirus in India. Hope it is not a planned target to expose Corona to rest of the country.

As per Tablighi Jamaat , the congregation had already commenced on March 13, whereas the Delhi government order prohibiting large gatherings came out only on March 16. The Tablighi Jamaat inviting people at this time, thousands of worshippers were already present in the building, since it was the only international headquarters of the sect.

Nizamuddin has turned out to be a COVID-19 hotspot, officials said.

There were 157 such people — 94 from Indonesia, 13 from Kyrgyzstan, 9 from Bangladesh, 8 from Malaysia, 7 from Algeria and one each from Tunisia, Belgium and Italy. Remaining are Indian nationals. They were staying in mosques in South East, North East and other districts in the city.

The government had issued visas to all the overseas visitors, enabling them to attend the event. They had no option but to accommodate the thousands of visitors in their building when their request seeking permissions for select vehicular transport for those stranded due to the lockdown elicited no response from the authorities, he said.

With this at least six regions across the country are now reporting cases that can be traced directly to the congregation.

Chief Minister Arvind Kejriwal said 24 people who attended the religious congregation at Tabligh-e-Jamaat’s Markaz earlier this month have tested positive for coronavirus, while 1,548 have been evacuated and 441 hospitalised after they showed its symptoms.

India reported its sharpest spike in the number of coronavirus cases on Monday as 227 people tested positive in 24 hours. The Health Ministry has attributed this to a lack of people’s support and delay in timely detection of cases. The government is using cluster containment strategies and doing rigorous contact tracing in these hotspots to check the virus from spreading further,” Joint Secretary in the Health Ministry Lav Agarwal said.