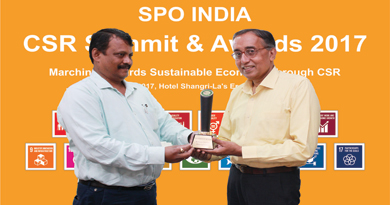 When the first draft of Act 135 was released, there was no provision for old age. it was HelpAge India that lobbied with the then Minister of Corporate Affairs, Sachin Pilot to include the elderly cause in the second draft.

The recipient of the SPOI CSR Person of the Year Award, Mathew Cherian, CEO – HelpAge India tells SPOI of how the organization has played the role of a catalyst for advocating the rights of the elderly –

Can you throw some light on the current focus areas of HelpAge India?

Our focus areas mainly revolve around health and livelihood for the elderly and old age homes for destitute elders whose children are not looking after them. Another area is policy change and advocacy, where we work with government and legislature to formulate and change policies favouring the elderly. These are the major thrust areas for us.

HelpAge as part of its service delivery is able to treat about 1.6 million people every year. This is done with the help of our 600 medical personnel that comprises of 145 doctors and rest are paramedics and pharmacists. And this program is largely funded by various companies under CSR, whereas our old age homes are funded primarily by our own sources of funds, which are individuals who are sponsoring. We have a program called ‘Sponsor a Grant’ where people donate money to HelpAge and it in turn sponsors this grants.

The livelihood program was started in the last few years. And this program was started with a basic concept of forming an elder self help group in a village. This group comprises of 20 elder people and they are given some micro finance and they start up social enterprises in their own community. These self help groups then get federated at the district level that goes up to form a national level federation. This we call it as Elders for Elders, which is spreading all around the country. This concept proves a point that very often elders are considered as useless and not bankable. 10 years ago, even banks never used to give them loans. But today banks are giving loans to people above 60 years; NABARD is extending credit to them. At the govt. level, the National Rural Livelihood Mission (NRLM) has adopted this concept and has started funding it.

Corporates have never been interested in funding old age homes. But recently RECL and AT&T have both come forward to fund old age homes. Increasingly we are also looking at telemedicine, of how to use digital platform to extend healthcare. These are some of the new innovations that we are trying out.

How best do you use technology to serve the elderly?

We have our helplines running in many cities, in many as 23 state capitals. But then sometimes in crisis, people are not able to use their telephone but today with the advent of smartphones we realized that we can have an SOS app. So we released an SOS app that runs on both android and iOS app. And this happens to be an instant communication. But increasingly even young people are using it when they come across any older people being harassed or found lying in the street. So this gives us 24×7 coverage and reach. In addition, there is also some information on the app which in combination with Google gives the location of all the nearby medical stores, ambulance providers. So it is a one stop app for older people. So in an emergency if you need an ambulance, you can call for an ambulance or the police or order medicine from the store.

Having said that there is a bit of digital divide among the elderly as they are not tech-savvy. We have another program to teach these modern technologies to them. Since grand children are the most tech savvy people in the entire family, we take their help to teach the older people to use technology like computer, mobile phone.

We are also involved with another technology initiative which is with the govt. of India under the department of science and technology – technology innovation for disabled and elderly. We are giving grants to institutions like IIT, regional engineering colleges to create some innovative applications for the elderly like fall prevention devices, under garments, BP measuring app on cell phone and so on.