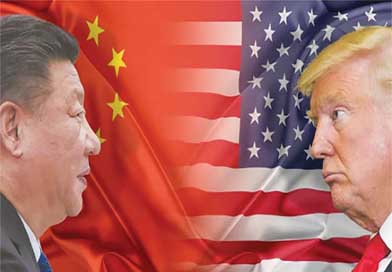 US imposes 25% tariff of $50 billion on Chinese goods

With the announcement of China reducing its annual trade surplus with the U.S. by at least $200 billion, Asian economies are likely to be significantly impacted in a full-blown trade war.

The Trump administration has taken a hard line against China since the president took office. The United States has made a series of moves focused on trade, including threatening tariffs on Chinese products and restrictions on Chinese investment flowing into the country. There is another claim from the United States that Beijing has unfairly stolen intellectual property, especially as China pushes ahead in developing the next generation of wireless technology known as 5G.

A $200 billion reduction in the U.S. trade gap with China by 2020 was on a list of demands the U.S. made earlier this month as Steve Mnuchin, U.S. Treasury Secretary led a delegation to Beijing. That mission left with little common ground with China and reports emerging of infighting among the U.S. officials. The U.S. merchandise trade deficit with China hit a record $375 billion last year this type of imbalance that has drawn the ire of President Trump. Companies with global operations, have warned that a US-China trade war would ripple around the globe.

Trump’s administration has threatened to impose tariffs of as much as $150 billion of Chinese imports to the U.S. as tensions over trade have escalated. Trump expressed doubt before his meeting with Liu that China and the U.S. would come to an agreement to avoid a damaging trade war.

China will increase its purchase of American goods and services in order to reduce the multibillion-dollar trade imbalance with the United States, the two countries said in a joint statement. How to balance the trade deficit and how much the imbalance will be reduced remains to be seen.

The White House said that China had committed to buying more agriculture and energy exports, but noted that American officials would at some point go to China to work out the details of their agreement. China agreed to “meaningful increases in US agriculture and energy exports”, the White House said, adding that the United States will send a team to China to work out the details. “There was a consensus on taking effective measures to substantially reduce the United States trade deficit in goods with China,” the White House said in a statement.

What is the hidden fact?

The US trade deficit with China was $ 375 billion in 2017.The trade deficit exists because U.S. Exports to China were only $ 130 billion while imports from China were $506 billion. The US imports consumer electronics, clothing and machinery from China. A lot of the imports are from U.S. manufacturers that send raw materials to China for low-cost assembly. Once shipped back to United States, they are considered imports.

The White House joint statement did not mention additional US demands, including a halt to subsidies and other government support for the Made in China 2025 plan that targets strategic industries from robotics to new-energy vehicles. China had made its own demands, including giving equal treatment to its investment, and warned that US companies may be excluded from measures to open its economy.

America’s main imports from China–the phones and gadgets that go under official classifications like “electrical machinery” ($129 billion) and “machinery” ($97 billion)–are often produced only in China. It has been suggested that the iPhone 7 alone may account for 4.4% of the U.S. trade deficit with China. A stronger yuan just makes these imports more expensive in dollar terms. It is the probable reason for the trade tensions that leads to a significant fall in US imports from China would have a sizable impact, not just on China, but on other countries such as Taiwan and Malaysia which export a lot of intermediate goods to China,” economists at Capital Economics wrote in a research note.

China can produce many consumer goods at lower costs than other countries can. Americans of course want these goods for the lowest prices. If the United States implemented trade protectionism, U.S. consumers would have to pay high prices for their “Made in America” goods. It’s unlikely that the trade deficit will change. Most people would rather pay as little as possible for computers, electronics, and clothing, even if it means other Americans lose their jobs.