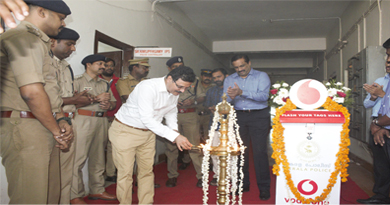 Vodafone India has announced a first of its kind initiative in association with the Kerala State Police to ensure a safe and worry free spiritual experience for lakhs of pilgrims visiting Sabarimala during the 2017-18 Mandalam/Makara Vilakku season.  In line with Vodafone’s long-term commitment to achieve highest standards of health, safety and well-being in and around the communities that it operates, all children under 14 years of age will stay protected with Vodafone RFID (radio-frequency identification) tags that will be hung on their neck at Pamba, ensuring their movements and location can be tracked till the time they return to Pamba from Sannidhanam. This initiative will help prevent incidents of children getting lost during the annual Sabarimala yatra and free up the Kerala Police force time and efforts to focus on more important tasks on hand.

Families travelling to Sabarimala with children under 14 years of age will have to visit the Kerala State Police office at Pamba and register to avail this service. Post registration, each child will be provided with a Vodafone RFID tag containing each child’s name, guardian’s names, contact number and relevant details. When a child pilgrim with an RFID tag is found wandering in the crowd, police officials finding him would take him to the control room and when Vodafone RFID reader reads the RFID tag, the whereabouts of the child will get passed on to the mobile number registered in the card. The lost child would be in a traumatic situation, not necessarily knowing the language to communicate to the police officials about himself and his parents. Thus, RFID tag hugely simplifying monitoring of child pilgrims and facilitating quick reunion with his/her dear ones, in case of getting lost in the crowd.

Each time a child pilgrim with an RFID tag crosses the readers, the location information will get passed on to the mobile number registered in the card. Thus as long as the Vodafone RFID tag remains hung on the neck, all movements of these children can be constantly monitored by the Kerala State Police force, hugely simplifying monitoring of child pilgrims and facilitating quick reunion with his/her dear ones, in case of getting lost in the crowd.

Extending his best wishes to all pilgrims visiting Sabarimala this year, Ajit Chaturvedi, Business Head – Kerala, Vodafone India said, “Vodafone has been a pioneer in telecom technology and has brought several value added products and services to make life simpler and better for our valued customers. The Sabarimala yatra is one of India’s biggest annual pilgrimages, bringing an estimated 40-50 million Ayyappa devotees from across India and overseas to Kerala. Each year, the Kerala Police deals with several hundred complaints of lost children between Pamba, the base station for the yatra and the holy Sannidhanam. This is the first time Vodafone is deploying our globally acknowledged RFID technology to benefit the masses at one of the largest congregation of human beings in the country. We are proud to associate with the Kerala State Police force for this initiative. Together, we seek the support of all citizens to support our endeavor to keep your children protected and we wish all pilgrims a peaceful and happy spiritual experience at Sabarimala this season.”

Vodafone RFID technology tags for young Sabarimala pilgrims will continue to be offered till Makara Vilakku, which heralds the closing of the current Sabarimala season.