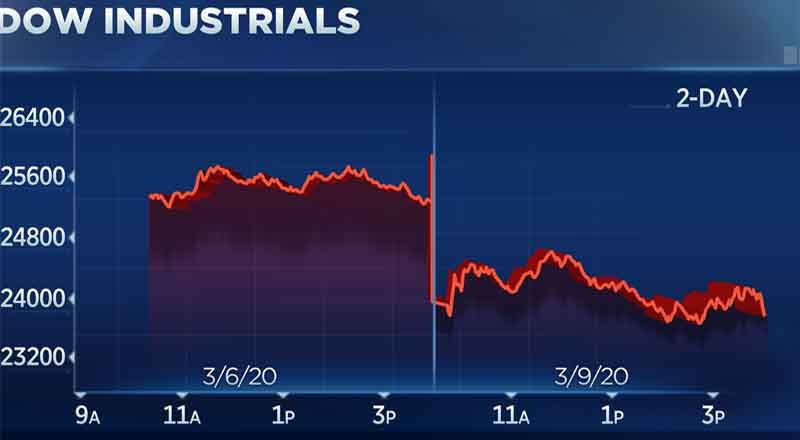 Yesterday (April 13,) Goldman Sachs strategists led by David Kostin reversed their near-term equity market outlook of 2000 on the S&P 500, stating the index is unlikely to make new lows. Instead, they expect it to close the year at a targeted 3000 level.

They cited the “do whatever it takes” stance of policymakers will outweigh all negative factors in the absence of a second surge in infections after the economy reopens for business. They continue to project a V-shaped recovery with a positive 3Q20 GDP growth of 3% and point out that market bottoms precede low points in any recession.

Explaining the Turn in Consensus Perception

Last Thursday (April 9,) the Fed surprised the markets when they followed up on their $2 trillion liquidity injection in March by providing upto $2.3 trillion in loan support. It plans to make secondary market purchases of high yield corporate bonds and commercial mortgage backed securities (CMBS) as well as facilitate new issuance through participation in them. On March 23, the Fed committed to open-ended Quantitative Easing including the purchase of Investment Grade Corporate Bonds, Municipal Bonds and static Collateralized Loan Obligations.

The message from Federal Reserve Chairman Jerome Powell went beyond the action when set the tenor of the Fed’s intent. He said, “we will continue to use these powers forcefully, proactively, and aggressively until we are confident that we are solidly on the road to recovery.” Even more seminal was, “We should make them whole. They did not cause this” signaling an absolution of moral hazard in their actions and the freedom to execute on an as needed basis without provisions.

This is precisely why strategists at Goldman Sachs, JP Morgan and Morgan Stanley promptly revised their outlook on Monday after the Good Friday weekend. JP Morgan believes that with the Fed looking to make all debtors whole, they are convinced of a full asset price recovery, and expect equity markets to reach all-time highs by 1H 2021.

Morgan Stanley strategists commented, “the nature of this recession – the unprecedented suddenness and trajectory of the contraction centered on a health crisis – has provided absolute cover for policy makers to go well beyond traditional support. As such, the bad actors of the last cycle are getting bailed out, which could ultimately limit the malaise we typically get in a recession.”

Three Arguments Against this Consensus View

At a minimum, two strong cases can be made to challenge the growing consensus:

The Fed’s effort includes a new $600 billion “Main Street Lending Fund” to offer support for mid-sized businesses. The plan is to offer 4 -year loans to companies, with principal and interest payments deferred for one year. Another facility plans to purchase up to $500 billion of short-term notes directly from states, counties and cities. It also includes an expansion of an existing facility to support the loan markets.

Earlier on March 27, the Congress approved a $500 billion fund to help hard-hit industries (PPP program) and a comparable amount for direct payments of up to $3,000 to millions of U.S. families.

These plans are unprecedented but look stellar only on paper. Our experience from the 2008 Financial Crisis that resulted from the implosion of the Housing Bubble clearly shows, similar ambitious plans intended to rescue homeowners didn’t produce their intended results.

Back then, the US Treasury’s Troubled Asset Relief Program (TARP) included 2 initiatives toward rescuing homeowners – the Home Affordable Mortgage Program (HAMP) and the Home Affordable Refinance Program (HARP.) These programs didn’t get close to their full potential in reaching distressed homeowners as the lending banks were too averse to risk to allow the programs to work. They instead cherry-picked applicants and refused to consider those with lower equity. Banks felt the preponderance of uncompensated risk in the paperwork involved with homeowners with equity below the agency guarantee threshold supplanted with private mortgage insurance.

As a result the housing bust created a wave of cumulative mortgage defaults and home foreclosures forcing the recession to extend out and realizing a U-shaped recovery.

This time, although the Fed ignores the moral hazard in making distressed small businesses whole, the banks, once again, do not concur. This is because they are required to take a 5% stake and also because of legal liability implications. Banks must attest that the proceeds of any loans won’t be used to repay or refinance pre-existing loans or lines of credit they’ve extended to the borrower. That said, the demand for these loans far exceeds the size of the program so far although the US Treasury Secretary has promised an unlimited supply for all those eligible.

This program has had some unintended consequences as the largest commercial bank, JP Morgan Chase has taken the step of halting all non government guaranteed small business loans as they direct their resources towards this new facility, effectively shutting down their regular small business lending channel. This is likely to suffocate lending to otherwise healthy businesses. The bank expects a surge of defaults on existing loans and today, (April 14,) in announcing their 1Q 2020 earnings, took an unprecedented $6.8 billion charge to increase their loan loss reserves in anticipation of rising defaults from a “fairly severe recession.”

The consumer is always typically hung to dry through major crises of this modern monetary driven era and this time is no different.

The number of US homeowners not paying their mortgages monthly payment for April has jumped 10-fold from the previous month (1064%) as reported by the Mortgage Bankers Association. To add to this misery, 31% of renters nationwide skipped their rent payment for April, according to the National Multifamily Housing Council. Two-thirds of these rental units are privately financed (ie. their mortgages are not government guaranteed) and could face foreclosure from missed payments.

The government’s direct payments of up to $3,000 to millions of U.S. families is temporary and inadequate as approximately 15% of the US labor force (or about 25 million Americans) have filed for unemployment benefits in the last 4 weeks.

All of these instances of distress point to how crucial it is from a timing and execution standpoint to get this right. The various programs have to achieve a turnaround over a very short window of time. Any inefficiency in the transmission of stimulus to their intended recipients will undoubtedly produce the inevitable defaults and damage to the economy and destroy all hope of a V-shaped recovery.

The trajectory of new infections and death rates, (projected to peak around mid-April,) have taken their first steps towards trending down in select locations in the US. The policy effort to “flatten the curve” is being seen as a success as the administration along with the media guides public opinion on a removal of lockdowns. This is leading many to assume an unobstructed return to normalcy. This is fallacious reasoning, as there exists a big gap in confidence to bridge between the lifting of restrictions and the return to normalcy.

There are at least two conditions, currently being regarded as sufficient, for a return to normalcy on the ground and the resumption of the bull market.

These factors will put a meaningful drag on the V-shaped resumption of economic growth that many now forecast.

So then, how does the prognostication above sit with current earnings forecasts that are lending support to the current equity markets?

Goldman Sachs expects S&P 500 earnings to drop just a mere 15% for 2020. They expect investors to discount this entirely, as the latter focus more on 2021 performance.

FactSet reported consensus bottom-up estimate as 152.81 for 2020, and 178.03 for 2021, reported on Marketwatch. The report says, most of the top-down estimates for 2020 are in the 115-120 range, and the 2021 estimate is about 150. This wide gap will resolve mainly with falling bottom-up estimates, rather than rising top-down upward revisions as the bottom up quantitative approach in estimating unknown damage from an economic shock typically falls short in providing accuracy while it is in progress.

On balance, with a hyper-aggressive Fed and with fiscal action not too far behind, a level of 1800 on the S&P 500 is entirely reasonable. A corresponding level on the correlated Dow Jones 30 index works out to 15000.

All said and done, market optimists tend to forget the basic principles of recessionary environment dyamics. In the well articulated words of a Bank of America strategist, “V-shaped optimists have forgotten a basic lesson of the business cycle. Recessions can be triggered by a variety of shocks-surging oil prices, central bank inflation fighting popping bubbles and now a health crisis-but the recession continues well after the initial shock fades. This is because the drop in activity triggers a nasty feedback loop in the economy that overwhelms the policy easing.”

Conclusion and the Trade 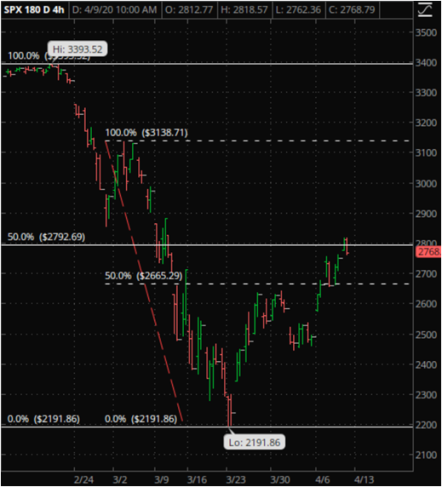 On 4/6 the S&P breached this level and continued to trend up, prompting us to revise our technical forecast

We had then applied 50% Fibonacci retracement levels on the recent downtrend of the S&P 500 index from 3138.71 down to 2191.86, to estimate a likely retracement path for the index in the very near future

With the retracement exceeded, we have reset to the previous range, which coincides with the peak-to-trough move of the S&P 500 from its 3393.52 high

A 50% retracement of this range suggests the index should rally to the 2792.69 level and then reverse course to give back its gains

This level was again breached yesterday, (April 13,) but we provide this trade call a standard deviation range (cushion on both sides of this level) of 3.5% based on our experience of retracement overshoots in 1987, 2001 and 2008. This is especially pertinent this time in the face of the massive stimulus unleashed on the economy and its influence on markets.

Time will tell shortly if the course of market action repeated in past recessions and crises are eluded as a result of policy hyperdrive.