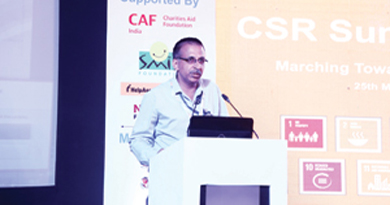 “We are a public sector company under the Ministry of Social Justice & Empowerment and we are one of the leading implementing agencies for implementation of CSR activities for various private and public sector companies. We were incorporated in the year 1972 and are a Scheduled C Mini Ratna company, registered as a not for profit company. We have 6 factories – Kanpur, Bengaluru, Bhubaneswar, Punjab, Jabalpur and a new one is coming up in Ujjain to cater to the pan India requirement. To reach out to the north-eastern states we are based at Guwahati.

In the last census done in 2011, the total disability population in our country is 2.68 crores. Out of this, the people who are having locomotor or orthopaedic disabilities is around 54 lakhs, which is 20% of the population, followed by visually impaired population and the hearing impaired people with speech disability and the mentally impaired ones. The top 5 states having highest number of disabled people is UP, Maharashtra, Bihar, Andhra Pradesh & Telangana and West Bengal. About 70% of disabled people are staying in rural areas and 30% in urban areas. Coming on to employment status of disabilities, more than 75% of the people are unemployed. The total market size of the aids, appliances and equipments is around 1500 crores. 17 of our products are all ISI marked.

If you see last year, ALIMCO has catered to 3.36 lakh people with disabilities and distributed close to 2.40 crores worth of equipments to people with disabilities. We are operating in a very high volume but low value category. We also distribute these appliances to children with disabilities under Sarva Shiksha Abhiyan. We have done 3 major camps in which our Honourable PM was the Chief Guest and in these camps we distributed equipments to more than 10,000 people and 10 crores worth of equipments. These camps were held at Vadodara, Navsari and Varanasi. We have also achieved 4 Guinness Book of World Records for putting in highest number of hearing aids in a day; we had installed a thousand hearing aids to 1000 people at Navsari.

Coming on to product portfolio, we have product catering to all kinds of disabilities. Major ones are the orthopaedically impaired equipments and artificial hands and legs. To manufacture these artificial hands and legs we have tied up with a leading German company named Otto Bock and in March this year, we commenced commercial production along with Otto Bock at our factory in Kanpur. It was completely a transfer of technology partnership. For ready to use equipments, we are into motorised wheel chairs, motorised tricycles and conventional hand-driven tricycles. For orthopaedically impaired, we also manufacture crutches, walking canes, rollators. For visually impaired, we have specially made for them smartphones, digi-players for school going children, smart cane (made from exclusive technology from IIT), shorthand machine.

The Government though is giving grants to cater to these people; they are too facing a shortage. And so we seek participation from both public and private corporates.”

Ajay Choudhary was speaking at the 3rd edition of ‘SPO India CSR Summit & Awards 2017′ held in New Delhi on 25th May. The main theme of the event was “Marching Towards Sustainable Economy through CSR’. The Summit brought all stakeholders from NGOs, corporates and government on a common platform thereby enabling them to network and interact on how to make Indian economy sustainable through CSR.