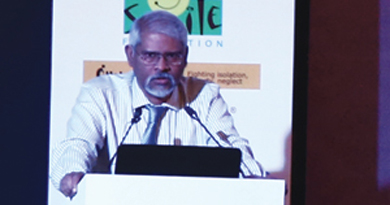 “Indian Oil as we are all aware, we call ourselves ‘Energy of India’. We are the largest commercial enterprise in India, largest marketing network, largest pipeline set-up and we are a Fortune 500 company. Having said this, the CSR spend last year was around 2.17 crores. Whether it is the government initiatives in ensuring smoke-less villages, the PM’s Ujala Yojana which is looked at world over as a fine example of what a corporate can do in terms of social upliftment. But we are also under tremendous pressure. Many of you would be aware that the OPEC sessions are on and there is a talk about cutting off supplies.  If supplies get cut, the crude gets expensive which results in products becoming expensive. There is a certain level to which the market can actually sustain. Indian unfortunately does not produce oil and gas to the tune that we can consume and therefore it becomes extremely difficult to manage in trying circumstances. Somehow right from the beginning the corporation which was incorporated in 1964 for the purpose of competing with the world’s 7 oil majors has been in the area of LPG, and LPG I say (not in oil terms) the ‘liberalization, privatization and globalization’ competitive environment right from beginning. So the challenges we face are phenomenal.

It is said that social responsibility dawned on the corporate world in India from 2013. One of our refineries in North-East has started a hospital way back in 1904, for the people in and around. There is also an Assam School of Nursing which is in operation since 1984. Health, water, sanitation apart whatever is the government mandated projects, you name it we are there. Oil companies have till now been very profitable, but with profit comes responsibility. The fact is we have to make considerable investments in sustainability. If i don’t have the bottom-line in place, where does my 2% come from, which I will invest in my CSR? So it makes lot of social sense when I say that CSR has to do a lot with business. And sooner I realize this, the better it for me. My responsibility as a corporate citizen becomes very important, especially when I am in the strategic sector, that I continue to do business in a profitable manner, I continue to deliver the lead and I continue to be competitive in the market. The coming of disruptive technology would also spell a little bit of strain for companies like us – the alternates, the renewable which you all are champions of will carry a cost. Placing these alternatives at the customer’s end will not be easy. Even Europe and US is struggling to carry that forward. Though it is going to happen very fast that is where companies like is have to react. Also we must attune ourselves to the realities. But how to take this forward? If I am a socially responsible corporate, then CSR opportunity has become kind of a social revolution in India. We are a country that is trying to do things in a very novel way and if I say that CSR has dawned upon every company since 2013, then I would not be wrong.

Having said that, till 2013, CSR was just a choice. Lots of corporates even said that CSR is compulsive philanthropy, which I think is not very effective in its truer sense. What we want to do today is have collaborative partnerships. I as a company may not be very familiar with the kind of activities that are entailed under CSR or may not be equipped properly to handle big projects, and that’s where the collaboration with other corporates or partners become effective.

S Mukherjee was speaking at the 3rd edition of ‘SPO India CSR Summit & Awards 2017′ held in New Delhi on 25th May. The main theme of the event was “Marching Towards Sustainable Economy through CSR’. The Summit brought all stakeholders from NGOs, corporates and government on a common platform thereby enabling them to network and interact on how to make Indian economy sustainable through CSR.