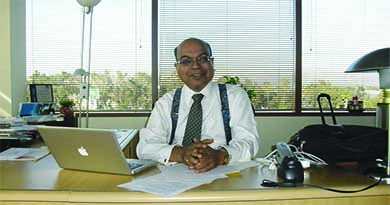 Every year, at the cusp of the year ending and beginning of the year ahead, I used to ponder what would be the most likely trend in information technology. In the earlier years, I used to bet on unraveling of block chain, Artificial Intelligence, hyper automation, distributed cloud computing, data mining and a host of other things that can be referred as mega trends in the digital landscape to take the technology to the next level. With the passage of time, my “wish lists” have not only become realties but the breakthroughs have gone much beyond my predictions and expectations. Technology, which is spinning around human ingenuity and requirements, I thought sets its own goals and agenda and evolves into an architecture shaped by the need of the time.

Now, more than the mega trends that IT can bring about in keeping technology grow from strengths to strengths, I wish technology become more responsive to the needs of the people. Sometime down the line, technology would leap much beyond human ingenuity and start dictating mankind what it should do and what not? I do not know. But I sincerely feel that such stage will not come because every new idea on technology should germinate in the human mind and cannot be retooled by robots, however strong and powerful the artificial intelligence that have wired into the robots. In short, technology has its own limitations and capacity restraints.

But the problem lies with the creators of these technologies. They can use the technology the way they want for destructive and creative activities. I want technology to leap and not to take a backseat: but less for its sake and more for humankind. Let there be hundreds of innovations and discoveries in the artificial intelligence. Of that breakthroughs, may be a few should be human focused.

In no way, I am asking for too many new technologies to emerge. They are already there in abundance. But the usage is restricted to a few privileged and rich.
I used to highlight the social responsibility to be assumed by tech companies. Could they focus more on socially relevant projects to eradicate poverty, destitution, malnutrition, healthcare and a lot more areas? I am not denying that such initiatives are not there. But they have touched only the fringes of the problem. More calibrated steps are needed to address these issues in a systematic manner.

I was pleasantly surprised by the efforts of some of the big tech companies like Apple and Amazon in investing healthcare. They are hiring doctors and health workers to create newer platforms for addressing the health issues. I hope that they are not motivated not alone by the huge profits that they can rake from this segment but also in providing healthcare solutions for the poor and under-privileged in continents and regions, where such facilities are rather primitive.

Education is another area that tech companies can enter leveraging internet. Many of the poorer areas in the world, where discontent and frustration run high are marked by low level of education. There should be coordinated efforts to reach out to these regions to improve the level and quality of education.

Without any reservation, I can vouch that during recent years, computer literacy and usage of modern communication tools like mobile phones, usage of smart digital platforms have increased in India. But still it is by and large restricted to some pockets. I was told in some of the up-market areas in Bengaluru and Chennai, payments to house maids, car washers, carpenters, masons etc are paid through digital platforms like Paytm, Google pay etc. Even the causal workers are paid through such platforms. There is a discernible difference in the usage of such platforms in the rest of India, though usage of mobile phones is common throughout the country. Should we address the skewed distribution in the application of technology across the country? That will be a good exercise to identify the reasons behind digital divide in the country. That said, it is commonly noticed that parents get to know about computer, digital applications more from their children, who have flair in understanding the complex applications of apps and other uses of digital platforms.

I feel that there is the need for an international watch dog for regulating digital transactions, privacy violations and in checking its misuses. The sooner we do that the better. That takes me to the issue of privacy of data. I still believe that it is an area which is nebulous and a proper demarcation of what is private and what is public should be drawn up. The present bill on privacy introduced in India, which is put in the public domain for wider consultations, has not done much to differentiate between the two sets of data. India should address this issue at the earliest since intimidation into private space will choke human freedom and a civilized society grants a large space for individuals.

The next in importance is the realization that mankind is more important than technology. Assigning a super human quality to technology can be a threat to the mankind. I feel by developing a strong technology platform with the help of artificial intelligence, robotics, sensors, cloud, block chain etc you can create a world where use of manpower can be brought to almost nil. But do we want such society, where there are billions of workers across the world are rendered jobless, sitting idle and become almost like lotus eaters even if the governments provide them basic amenities. We have to shape a society where human beings are given their importance and technology becomes a tool to enhance their happiness. In short, my wish for the coming year and the decades ahead is to blend man with technology in such a way that there is maximum happiness and minimum pain. That I believe is the cornerstone of a welfare society. Not the other way round!