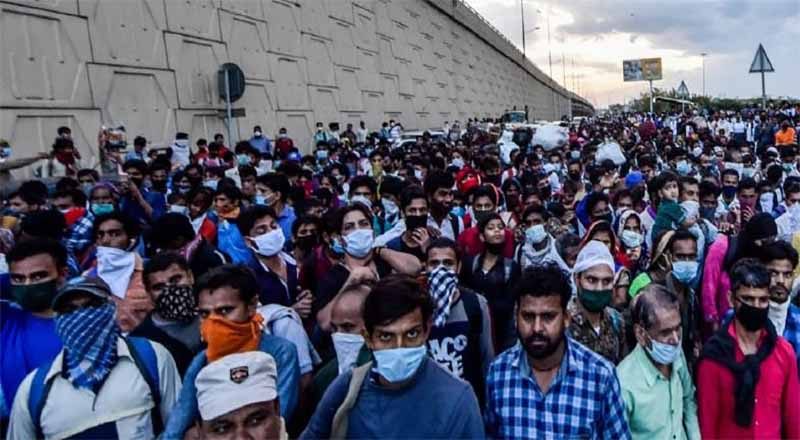 The world is gripped with fear and panic as the novel coronavirus disease (COVID-19) pandemic has affected around more than a million people across the globe.says Downtoearth.

China reported over 3,000 fatalities — European countries like Spain and Italy even more. India, with a population of 1.3 billion, is under a 21-day nationwide lockdown — the only country to have exercised social distancing at this scale.

A draconian measure indicates either the cases are underreported or the treatment facilities are insufficient for the expected number of cases.  Nevertheless, a relief package of $22 billion — one per cent of the GDP — was announced as a measure to protect the daily wage workers, senior citizens and farmers.

The United States allocated $2 trillion economic package and Denmark is spending to the tune of 2.5 per cent of GDP on a fiscal front.

Germany and France have will spend $1 trillion and $49 billion respectively to cushion the economy from the looming crisis. As the number of cases continues to rise, India is under tremendous pressure to contain the virus.

South Korea has effectively flattened the curve despite having a higher population density than India.

With a capacity of conducting 9,000 tests a day in 104 centres all over the country, total tests conducted were around 66,000 as on April 3.

Apart from low testing rates, shortage of hospital equipment and quarantine facilities are few other challenges. In this backdrop, lockdown was a necessary tool to reduce the intensity of spread.

However, a more robust, assuring economic package needed to be deployed. An extended curfew of three weeks would require more financial remedies, especially for the low-income groups.

Indian labour market is dominated by 77 per cent informal workers and a slowdown in the economy will increase unemployment. The current announcement offers an increase in wage up to Rs 200 for MGNREGS labourers, but with restricted movement it is almost impossible to disburse the wages in a stipulated time.

Given the leakages and lack of transparency, hiking the wages is missing the reality on ground. Apart from giving Direct Benefit transfer (DBT) to farmers, the government should immediately increase the minimum support price (MSP). Fresh produce of marginal farmers is unsold with no buyers with social distancing in practice.

Local markets must be strengthened under state’s supervision and farmers’ cooperatives must converge to enable management of transit.

Additionally, direct procurement from farmers has to be assured to boost farmers’ confidence who are likely to be affected by disruption in supply chain and limitation in logistics.

India has a poor health infrastructure — one hospital bed is available for 1,844 people — and cannot afford to be passive about the increase in spread of virus. Inequality in public health across the state is also evident for an inconsistency in managing the crisis.

Facing challenges to balance the trade-off between economic cost and infected cases, fiscal deficit should not be of immediate concern. It is apparent that the informal unorganised sector will bear the weight of an expected economic downturn.

Moodys’ forecast Indian economy to grow at 2.5 per cent, which is much lower than the previous projection of 5.3 per cent. Unemployment levels in the US soared to a record high at 5.5 per cent, indicating potential damage a pandemic crisis could cause to the labour market. India with a significant number of invisible labourers is at a higher risk of witnessing an explosion in poverty levels.

Internal migration was pegged at 139 million, with the biggest source being Uttar Pradesh, followed by Bihar. The effect of lockdown is visible on the migrant workers, as they were seen stranded in cities, unable to travel back to their homes.

Considering a lockdown to be an effective strategy in combating the spread, limited economic support would severely affect the livelihood of migrant workers. Given the bleak living condition in urban slums, it is almost impossible to control the spread of virus among slum dwellers.

Another big challenge is to implement stringent sanitation and hygiene across the country. According to census 2011 data, only 30.7 per cent of rural households had access to toilets and 76 million Indians had access to safe drinking water.

The stark disparity between the rich and poor is reflected during a health pandemic. The COVID-19 pandemic should serve as a wakeup call to set India’s bar on health and sanitation high in the coming year.

A sound economic plan with immediately actionable tasks to the target population is important for two reasons. One, during the time of shutdown, a support mechanism to ensure people receive ration for their daily needs. Two, schemes and policies to disburse cash and emergency funds will enhance economic security of people likely to experience financial constraints.

The negative supply shock stems from stalled production, which has to be addressed by strong fiscal and monetary policy. This slowdown will invariably lead to a drop in income levels, increased unemployment rates and contracted domestic demand.

A blueprint to combat the upcoming crisis should be strategised keeping in view the unorganised sector and unskilled labourers.

A time-bound unemployment allowance till India recovers from the supply shock would help in boosting aggregate demand. Broadly, public investments on health, education and skill development must take priority under government spending in the medium run.

Economic architecture in response to COVID-19 should be built on the foundation of infusing finance in the most efficient channel. Bringing radical economic measures during emergency and bridging the trust deficit are part of the battle against the virus.