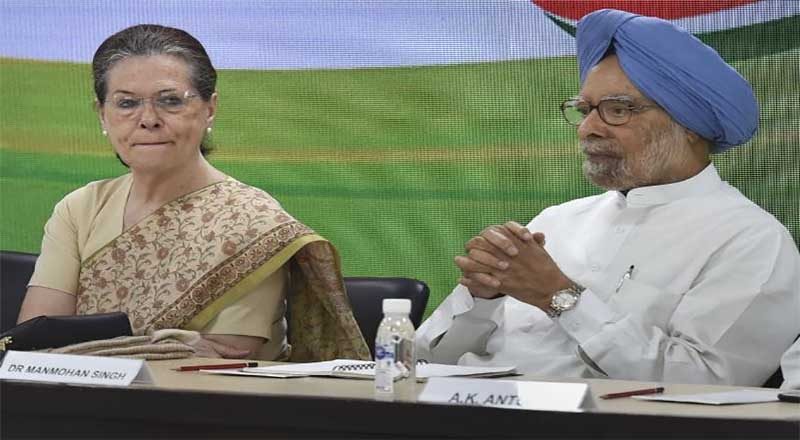 Congress president Sonia Gandhi on Thursday expressed concern over the country’s “grim” economic situation and accused the Bharatiya Janata Party government of misusing its mandate in the “most dangerous” fashion.

Addressing central and state leaders from across the country in her first major meeting after taking over as Congress chief, she laid the roadmap for the party’s revival at the grassroots level and asked them to adopt an “agitational” approach while raising people’s causes and not be aggressive on the social media alone.

“Democracy has never been at greater peril than it is now. As I said a few weeks back, the mandate of 2019 is now being misused and abused in the most dangerous fashion,” Gandhi said.

She said the country is looking to the Congress to confront and combat the forces that seek to appropriate the legacy of Mahatma Gandhi, Sardar Patel, B R Ambedkar and misrepresent their true message for nefarious ends.

“We must stand up fearlessly to fight on the streets, fight in villages, towns and cities. We must have a concrete agitational agenda on issues of pressing concern to the people, whether economic or social.

“It is not enough to be active and aggressive on social media even though that too is needed and we need to do that better. Far more important is to go to the people directly,” Sonia Gandhi said at the meeting of AICC general secretaries, state Congress chiefs and CLP leaders.

Sonia Gandhi said the Congress’ resolve and resilience is under severe test.

“We cannot afford to let our self-confidence and morale falter. This is the time when it will become clear who are steadfastly devoted to the Congress as an ideology (as a vehicle), for strengthening the nation, and who look to the party only as an opportunity for self-advancement.”

On some leaders quitting the party in recent times, the Congress president said, “They have revealed their opportunistic character.”

Asserting that the situation is challenging in the upcoming polls in three states, Sonia Gandhi said, “If only the party’s interests and nothing else are kept topmost in our minds, then we will regain our lost position.”

At the meeting, Manmohan Singh spoke about the poor state of the economy.

“We are in the midst of dangerously protracted slowdown and the economy is going from bad to worse,” he said, adding the government is not realising this and the worst can happen in the case of employment.

Party leaders K C Venugopal and R P N Singh later told reporters that Manmohan Singh spoke in detail on the slowdown of Indian economy and pointed out that stock markets are showing an atmosphere of gloom.

“The responsibility of the Congress Party is to tell people that the government is ignoring the promises that it had made and that the reality of the economy is very different from what was promised,” the former prime minister said.

The Congress decided to stage massive agitations across the country from October 15 to October 25 against the government’s policies that have allegedly led to “economic slowdown”.

The party, during the meeting, also decided to hold conventions of its delegates at all district and state headquarters from September 20 to 30. It will also hold ‘padayatras’ from October 2 to October 9 to mark the 150th birth anniversary of Mahatma Gandhi.

The Congress also decided to launch a major membership drive through both digital and traditional modes, starting mid-October.

“We agreed unanimously about the need to educate people about (Mahatma) Gandhi on his ideas about freedom, swaraj, nationalism and secularism,” the leaders said.

“The Congress will organise training activities building up workers as coordinators. It was decided to have a more contemporary training module. The emphasis will be on communicating with youth and to educate them about true nationalism and secularism,” Venugopal said.

Sonia Gandhi said the meeting is taking place at a time when there is a prolonged economic slump, when job losses are mounting by the day, when the confidence of the investors is getting shakier, when the government appears more and more clueless and insensitive by the day.

She said that the Congress has special responsibility in states where it is in power — Punjab, Rajasthan, Madhya Pradesh, Chhattisgarh and Puducherry — and these states must stand out as examples of sensitive and responsive governance, accountable and transparent administration.

“We must be seen to be fulfilling our manifesto commitments. If not, we will lose people’s support with obvious consequences,” Sonia Gandhi said.

Congress president Sonia Gandhi told her party colleagues that being active on social media is not enough and the party needs a concrete plan to reach out directly to the people.

Gandhi, who does not have a Twitter account to date, was speaking at a meeting of All India Congress Committee leaders at the party headquarters in New Delhi.

“It is not enough to be active and aggressive on social media. Even though that too is needed, we need to do that better. Far more important is to go to the people directly,” she said.

The Congress, during Rahul Gandhi’s tenure as party chief, had recaliberated its social media plan. The party has aggressively used social media to target the government.

Speaking at the meeting, Sonia Gandhi said the country is looking to the Congress to confront and combat the forces that appropriate Mahatma Gandhi, Sardar Patel, Dr B R Ambedkar and misrepresent their true messages for their nefarious ends.

“We must stand up fearlessly to fight on the streets, fight in villages, towns and cities. We must have a concrete agitational agenda on issues of pressing concern to the people, whether they be economic or social,” she said.

“We are soon going to have elections in three states. The situation is challenging and it is only if we keep party interests and nothing else other than party interests uppermost in our minds, that we will regain our lost position,” she added.

Sonia Gandhi, who took over as party chief months after the Congress faced a drubbing in the Lok Sabha polls, said states ruled by the party should emerge as model states.

These states must stand out as examples of sensitive and responsive governance, accountable and transparent administration, she said.

“We must be seen to be fulfilling our manifesto commitments. If not, we will lose people’s support with obvious consequences,” she added.