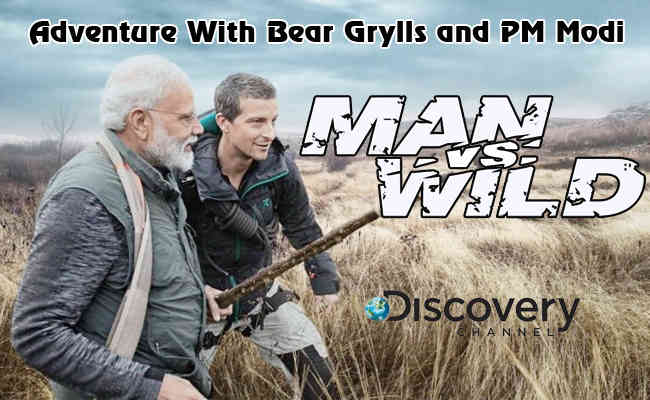 The prime minister ‘ventures into Indian wilderness to create awareness about animal conservation and environmental change’, where the adventurer Bear Grylls, PM Modi is seen going on an adventure in Jim Corbett National Park Uttarakhand.

Discovery Channel released a promotional video of an upcoming episode of the popular show, where the video was posted on Twitter by the channel as well as the host of the show Bear Grylls.

Narendra Modi will be seen in a new avatar on August 12,where he is going to appear on the Man vs Wild television show, going on an adventure in the wilderness of forests in India. The show will be aired on August 12 on Discovery Channel at 9 pm.

People across 180 countries will get to see the unknown side of PM @narendramodi as he ventures into Indian wilderness to create awareness about animal conservation & environmental change. Catch Man Vs Wild with PM Modi @DiscoveryIN on August 12 @ 9 pm. #PMModionDiscovery pic.twitter.com/MW2E6aMleE

PM Modi is seen welcoming Grylls to India and holding up a weapon carved out of bamboo and other material collected from the forest and saying, “Main aapke liye isko mere paas rakhunga (I will keep this with me for you). In a clip of the show that was shared by Grylls on his Twitter account, PM Modi, will be seen riding a small dinghy in a river along with the adventure travel show host.

The show has been shot as a means to promote awareness on animal conservation and environmental change.

In the series, Grylls “tackles extreme challenges and navigates through remote locations around the world, sharing invaluable survival strategies along the way”.