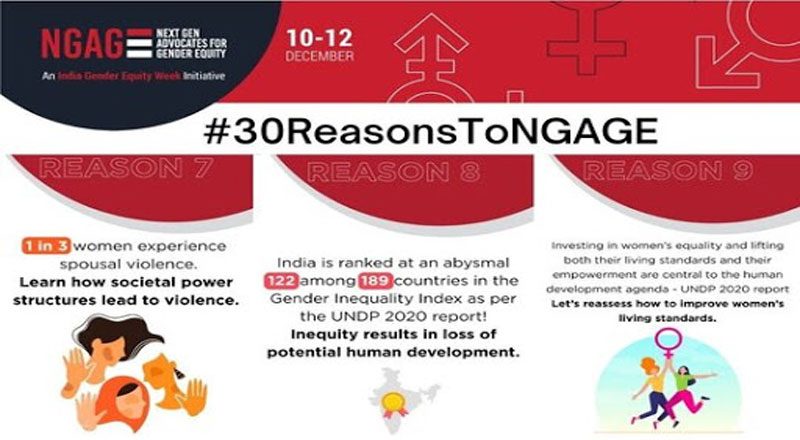 For an equitable and sustainable future, it is imperative that India’s youth take cognizance of prevalent gender biases that limit our nation’s development and sensitize themselves about their rights and responsibilities while harnessing their collective potential for the greater good of their personal and wider circles.

It is in lieu of the above that Durga India is proud to organize NGAGE (Next Gen Advocates for Gender Equity) —  a thought-provoking, the first and largest of its kind, virtual forum hosting over 3000 participants. NGAGE will serve as an interactive platform for young citizens to understand that they can bring about greater changes while they engage in meaningful conversations and make conscious efforts to bridge gender gaps.

The initiative will bring forth key insights from distinguished thought-leaders who have dedicated their efforts for greater societal equity; enable the nation’s youngsters to think and act like tomorrow’s leaders, today. “We aim to reassure young minds that their concerns, opinions, and suggestions are being heard and that the guidance they seek in solving problems for the future is available to them”, says Priya Varadarajan, Founder of Durga — a citizen-sector organization focussing on women’s safety and creation of gender-equitable spaces since 2013 — and the organizer of NGAGE.

“India’s youth population (15-29 years) is about 366 million. Young people are both the receivers and the reﬂectors of the violence in societies they inhabit. However, they have the potential to be tomorrow’s leaders and today’s stakeholders in driving changes that address issues resulting from inequity. These young minds need to come together to create a progressive, gender-equitable society.” she concludes.

NGAGE will serve as a platform to collectively unlearn and relearn gender-based issues with insights from thought-leaders, who work towards rectifying gender equity gaps. This forum will dissect unequal gender representation, talk about the impact of gender disparity on wellbeing, implications of prevalent societal structures, patriarchy, constitutional framework and rights, youth initiatives and more.

Designed to be an annual, national movement to promote gender equity in India, NGAGE will reinforce the spirit of 16-days of global activism against gender-based violence through a wide array of online and offline events, gender sensitization workshops for school and college students, incubation for social projects addressing gender inequity, corporate initiatives for amplifying gender-equitable workplaces, CSR aimed at enabling greater equity, amongst other interesting sessions.

Partners for the event include:

sapient.training as the Knowledge Partner;

Airmeet as the Event Technology partner;

HashBUGS for Tech Integration, and

Statistics around the world on sexual assault, violence and abuse against women and children has seen a sharp spike over the last few years. And India isn’t too far behind in their numbers of crime against women and children. India recorded an average 87 rape cases every day in 2019. The “Crimes in India – 2019” report shows that crimes against women have gone up by 7.3 per cent last year. The crime rate registered per lakh women population is 62.4 per cent in 2019, up from the 58.8 percent figure of 2018. Given these statistics, it then becomes the citizen’s responsibility to address this on a war footing.

DURGA (Dare to Understand behaviour, Respond appropriately and Guard ourselves Ably) is a citizen sector organisation that works closely in the area of gender, gender equity and safety against sexual harassment. Through interactive and highly engaging sessions, Durga helps in understanding behaviour, respond to inappropriate behaviour in the best possible manner and to be able to get out of any situation easily. Along with ensuring that each individual is safe themselves, Durga also ensures that the spaces we occupy is safe through various programs and initiatives.