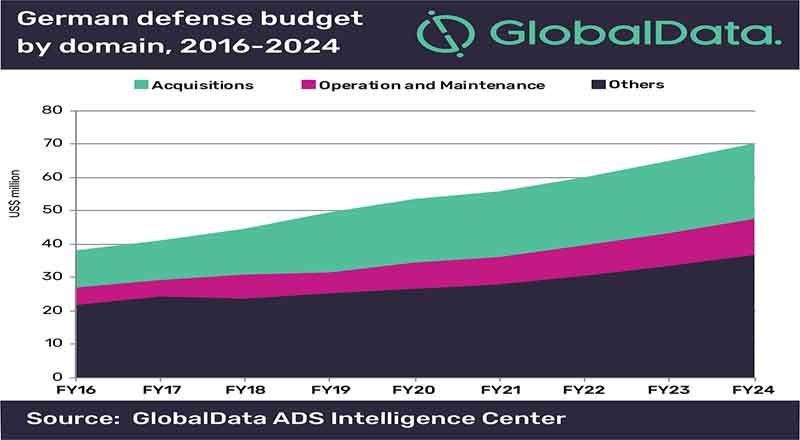 Germany will spend US$19.3bn on the acquisition of defense equipment in 2020 in an attempt to combat ongoing issues with fleet readiness and military capabilities, according to GlobalData, a leading data and analytics company.

GlobalData’s latest report, ‘Germany – FY 2020 Defense Budget Analysis, Competitive Landscape and Forecasts’, reveals that 35.9% of FY2020’s total defense budget is to be spent on the procurement, research and development (R&D) and upgrading of new platforms and systems across all military domains.

Madeline Wild, Associate Defense Analyst at GlobalData, comments: ‘‘Despite ongoing criticism from the US and President Trump, Germany has increased its level of overall defense spending to US$53.7bn. While the percentage of GDP being spent remains low (1.3%) in comparison to other European NATO members such as the UK and France, the increase will help improve the capabilities of the German Armed Forces who have faced international reproach in recent years.

The German fleet has greatly diminished since the end of the Cold War; any military action taken abroad would need support from other armed forces. The defense budget grew by 7.6% in FY2020 to try to reverse this decline.

Growing fears regarding global isolationist trends mean many European countries are aiming to improve the strength of their militaries to reduce reliance on longstanding allies, in particular the US.

Wild adds: “Tensions in NATO and Britain’s withdrawal from the EU represent a broader picture of isolationist policies in the West. Germany’s recent defense budget is a necessary reaction to this if they wish to maintain a military deterrent.”

However, Germany is keen on maintaining European defence integration and has taken measures to ensure this such as their participation in joint weapon development programs.

Wild concludes: ‘‘In order to maintain crucial European alliances in the face of isolationist trends, Germany is participating in numerous programs such as the development of the Future Air Combat System with France. This will aid both general European integration and greater regional military strength.”