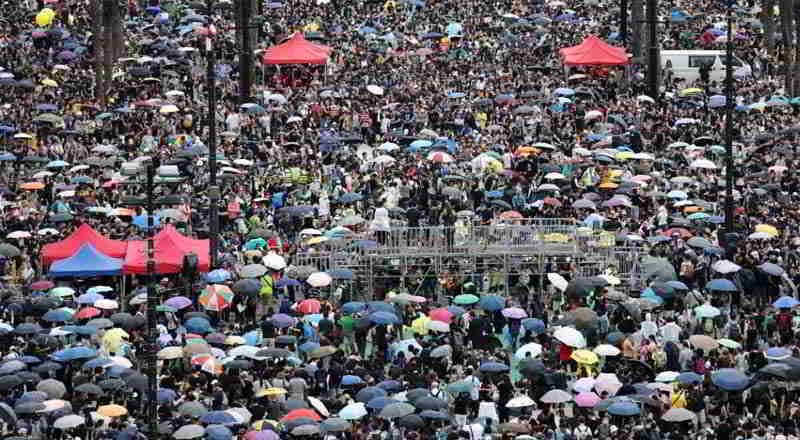 Hundreds of thousands of people returned to the streets of Hong Kong in an attempt to restore peace after violent scenes at the city’s airport earlier this week. It was the 11th consecutive week of protests. Organizers said 1.7 million participated in the demonstrations, while police put the number at 128,000 people.

The march came amid calls for peace and unity after ugly scenes at the airport Tuesday, when a small crowd of protesters attacked a man they accused of being an undercover cop. The protests started in June over a controversial extradition law, but have now expanded to call for Hong Kong’s leader to step down, an inquiry into alleged police brutality, for those who have been arrested to be released and greater democratic freedoms.

Police were noticeably absent from the protests. Hong Kong’s government called for social order to be restored. And as unrest intensifies, Beijing has also been increasingly critical and the protesters have been doing some soul-searching, questioning whether their spontaneous style of demonstration risks going too far.

It is very much surprising that the movement had no leaders, the Hong Kong government and Beijing would have a harder time quelling it. More than 700 protesters have been arrested, yet thousands keep rallying in the streets. “Be Water” — the organizing principle protesters borrowed from Bruce Lee, the late Hong Kong American actor and martial artist — has kept them one step ahead of the police.

Hong Kong’s government and police are to blame for the escalation of violence, and the demonstrators will remain united even if they disagreed on tactics. The protests have started to follow a pattern. Peaceful marches or rallies throughout the afternoon turn into clashes after dark when younger protesters continue marching past approved areas or deadlines. Then police come out, firing tear gas and rubber bullets.

The young people around Cheung began shouting that they were going to confront the mainlanders. Still, the blamed to the rising aggression primarily on the police for using violent tactics and the Hong Kong government for refusing to listen or compromise. By Friday night, protesters had begun to gear up for the weekend demonstrations.

It is still unclear what will happen next. The government said in a statement that it would begin “sincere dialogue” with protesters once everything calmed down.