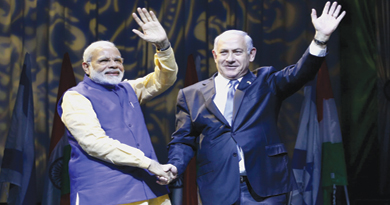 Ever since the NDA-led government took the reins of the company, India’s foreign policy has seen undergoing an unparalled transformation. The recent 3-day visit to Israel by PM Narendra Modi signalled another marked departure from policies of previous non-BJP governments in India who chose to shun Israel or establish any overt relations with the country. The visit also was unprecedented from the fact that it was the first time that an Indian Prime Minister had officially visited Israel. It was noted that Prime Minister Modi did not visit Palestine during the trip, breaking from convention.

It is no coincidence that the first ever visit by an Israeli prime minister, Ariel Sharon, took place in 2003 when BJP led NDA government was in power with Atal Bihari Vajpayee as the prime minister.

In the 48-hour visit, Modi met with Israel’s political leadership and signed a series of technology, water and agriculture agreements between the two countries. During his visit, PM Modi has held talks with Israeli counterpart Benjamin Netanyahu and President Reuven Rivlin.

The leaders sought to strengthen India-Israel relationship on a range of areas including defence and technology. Wide-ranging delegation-level talks were being held between the two countries to enhance India-Israel ties in security, agriculture, water, energy and defence, among others. PM Modi and Prime Minister Benjamin Netanyahu also discussed measures to counter terrorism and increase cooperation in sharing of intelligence in this regard. Economic, cultural and people-to-people ties are being discussed and a number of agreements have been signed between India and Israel.

Modi during his visit also announced a direct Delhi-Mumbai-Tel Aviv flight and simplified rules for getting Overseas Citizen of India (OCI) cards, thus drawing loud cheers from the 5000-strong crowd of Indians at the Tel Aviv Convention Centre. He also took out time to interact with Indian and Israeli CEOs to discuss the immense opportunities in India and the wide scope of India-Israel economic cooperation. The CEOs of both the countries meanwhile concluded MoUs worth over 5 bn $ on the sidelines of the visit. A total of 12 MoUs were signed between Indian and Israeli companies, valuing over 4.5 billion dollars according to Pankaj Patel, Dy President – India-Israel CEOs forum.

India formally recognised Israel post independence in September 1950. However its Israel policy was driven by the principled stand of solidarity with the Palestinian cause and India’s international approach on issues as aligned with its domestic needs. Nehru had mentioned this in his reply to Einstein that national leaders needed to be selfish to see the interest of their countries first when it came to geopolitics. So India continued with its pro-Palestine policy in line with its principled stand and the sentiments of its large Muslim population, coupled with the fact that more and more Indians were heading to the Gulf nations and it was fast emerging as a major source of remittances.

In addition, India was also dependent on the Arab nations for oil supply to meet its energy needs. Emergence of the Non-Aligned Movement (NAM) in 1950s, of which Nehru was a founding member, further drove India away from taking any pro-Israel stand openly.

The 1962 India China war was the first occasion when Nehru wrote to Israeli Prime Minister David Ben Gurion for shipments of arms and ammunition. Though expressing sympathy and solidarity with India, Ben Gurion refused help.

It was in 1992 when India finally established full diplomatic relations with Israel but only after taking Palestinian President Yasser Arafat on board. Arafat was in Delhi and after meeting Prime Minister Narasimha Rao, he announced that establishing embassies and maintaining diplomatic ties were India’s sovereign decisions and he respected it.