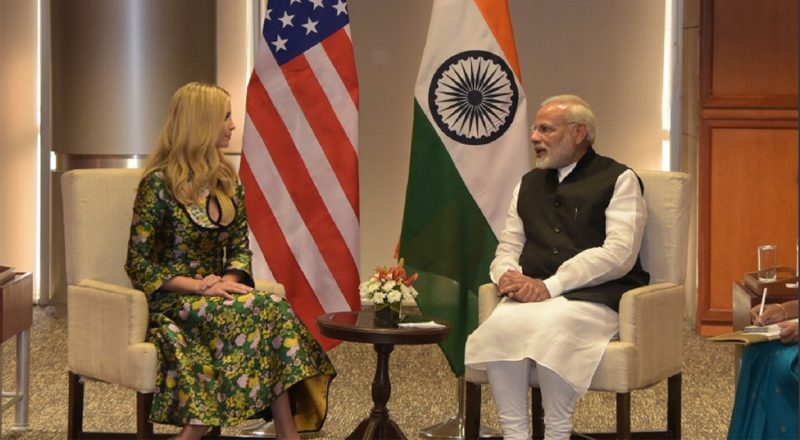 Speaking at the Global Entrepreneurship Summit 2017, Prime Minister Narendra Modi invited global entrepreneurs to come to India by saying that it provides an investment friendly environment where restrictions have been removed and archaic laws abolished.

In his address, he said that over 1,200 outdated laws have been scrapped, 87 rules for foreign investment eased in 21 sectors and several government processes have been taken online.

“To my entrepreneur friends from across the globe, I would like to say, ‘Come, Make in India, Invest in India’, for India and for the world,” he said. “I invite each one of you to become a partner in India’s growth story. And once again assure you of our wholehearted support.”

Ivanka Trump, US President Donald Trump’s daughter and advisor to the White House attended the Summit. She was leading a US delegation to the summit and gave the keynote address.

Stating that an investment-friendly environment needs to be stable from the macro-economic perspective, Modi said that India’s foreign reserves have crossed USD 400 billion and the government has succeeded in containing the fiscal and current account deficits as well as curbing inflation.

“We continue to attract large foreign capital flows,” he said.

To young entrepreneur friends from India, he said, “Each of you has something valuable to contribute towards creating a New India by 2022. You are vehicles of change and instruments of India’s transformation.”

While listing out business friendly measures the government has undertaken, Modi said loans worth Rs 4.28 trillion (Rs 4.28 lakh crore) have been sanctioned under the entrepreneurship loan scheme, MUDRA.

Under the ‘Atal Innovation Mission’, Tinkering Labs are being opened in more than 900 schools to promote a culture of innovation and entrepreneurship among children, he said.

After taking electricity to almost all villages, a new scheme, ‘Saubhagya’ will provide electricity connection to all the families without electricity by December 2018, he said, adding that a programme to provide high-speed broadband Internet to all rural areas by March 2019 has also been launched.

“We are working on developing a national gas grid. A comprehensive national agency policy is also in the pipeline,” he said. The Prime Minister said the taxation system has been overhauled with the launch of GST, while the Insolvency and Bankruptcy Code has been introduced to ensure timely resolution for stressed ventures.

“We have recently strengthened the code by preventing wilful defaulters from bidding for stressed assets,” he said. “Tough measures have been adopted to tackle the parallel economy, check tax evasion and control black money.”

On financial inclusion, he said almost 300 million bank accounts with deposits of over Rs 685 billion have been opened through the Jan Dhan Yojna. “These bring previously un-banked sections of society into the formal financial system. Of these, 53 per cent account is of women.”

“We are steadily working towards a less cash economy and have launched a Unified Payment Interface App called BHIM. In less than a year, this platform is facilitating almost 280,000 transactions daily,” he said.

Modi said India has been an incubator for innovations and entrepreneurship over the ages.

The PM concluded by saying that the government’s Start-Up India programme is a comprehensive action plan to foster entrepreneurship and promote innovation. “The scheme aims to minimize the regulatory burden and provide support to start-ups,” he said.