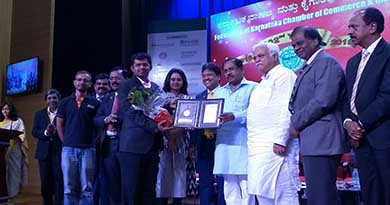 KPIT Technologies was awarded the FKCCI CSR Awards 2018 by the Federation of Karnataka Chambers of Commerce and Industry (FKCCI). The award for CSR Excellence in the Basic Education category for KPIT’s contribution via the Chhote Scientists project was presented by Hon’ble Deputy Chief Minister of Karnataka, G. Parameshwara, at the FKCCI CSR Conference and Awards – 2018 held in Bengaluru.

FKCCI, a pivotal organization promoting and motivating industry and trade in Karnataka, bestows the CSR Awards every year to corporates and recognizes the best, innovative CSR projects. KPIT won the award for its significant contribution in providing hands-on science education to children through its Chhote Scientists program in 177 schools across Pune and Karnataka, which saw 15,000 children benefit from it. Chhote Scientists is a community and social initiative which aims at cultivating interest in science amongst children and encouraging them to solve real-world problems using practical applications and experiments.

Speaking about the win, Tushar Juvekar, Head – CSR, KPIT Technologies Ltd., said, “Chhote Scientists has been at the forefront of KPIT’s educational initiatives under the CSR umbrella, and we are extremely happy to be recognized for our work. We will continue to encourage students to think beyond textbooks, trigger their enthusiasm and innovative ability to create new technologies, products, and services, that will result in a new and better future for India.”

Launched in 2012, Chhote Scientists has benefited students in rural Pune and Bengaluru, and the neighboring towns such as Mysuru, Hubballi, Dharwad, Pimpri Chinchwad, Mulshi, Mawal, Roha, Osmanabad, and Dhule. Over 3000 employee volunteers from KPIT, and team members of KPIT’s NGO partner, Jnana Prabhodini, have contributed by imparting experiment-based classroom training sessions for children studying in 8th and 9th standards.

Over the years, the program has developed two paper-based volumes of its syllabus and launched a Chhote Scientists app on the Android platform to further its accessibility to all. KPIT also signed a two-year statement of intent (SOI) with NITI Aayog (National Institution for Transforming India) to support and mentor select Atal Tinkering Laboratories (ATL) for secondary level school children across the country. This extended Chhote Scientists into newer fronts to play the role of a foundation program at select ATL schools across Pune and few North-Eastern cities.