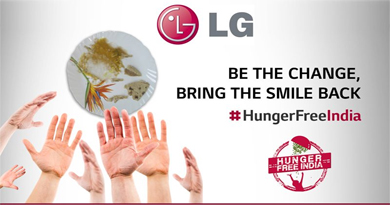 LG Electronics India is celebrating the 70th Independent Year of the country, with the launch of the initiative #HungerFreeIndia. The campaign is dedicated to help eradicate Food Wastage in India and thus inviting the whole nation to come forward and take pledge to avoid food wastage and help eradicate hunger.

LG has yet again proven that it is a brand which cares. It has always taken a lead in initiating unique means of connecting with consumers and giving back to the society in which it operates. This time it has gone a notch ahead with the introduction of a noble campaign ‘’Hunger Free India’’. The campaign is a renewed extension of the previously launched ‘’Mute the Growl’’ campaign which was launched to create awareness amongst individuals, businesses and organizations towards fighting the issues of hunger and food wastage in India. The campaign aims to change the basic thought of how food generally is disposed off without a second thought, while we live in a world where 50% of food across the world never reaches the hunger-stricken.

The campaign was launched on the special occasion of India’s 70th Independence which also coincides with LG’s 70th anniversary globally and 20th anniversary in India. This will be a Pan- India campaign wherein Indians will be pledging their support for this pressing cause while also giving them better opportunities for an enhanced engagement in bringing this change.

The ‘’Hunger Free India ‘’campaign encourages appreciation for food, saving it from getting wasted and inculcating empathy for those who do not have enough to eat. The campaign aims to harness the potential of social media platforms such as Facebook, Twitter and YouTube which have a mass user appeal, to encourage people to eat only as much as they need to prevent food wastage. The campaign is sure to reach millions of Indian consumers who will be advocates and change leaders for moving closer to the dream of a Hunger Free India. The campaign further strengthens LG’s core essence of ‘Life’s Good’ in the truest sense. 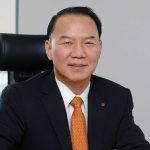 ‘’This campaign has been specially designed for spreading mass awareness for a cause that LG feels deeply about. It is yet another gesture from us to showcase our deep care for the Indian society. We want to bring a positive change in the behaviours of people, their eating habits and encourage them to be a more responsible society collectively.’’ 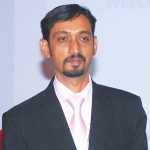 “We have further pushed our previous campaign and given it rejuvenation to become larger and more extensive through this campaign. We will create various touch points wherein people will have a greater opportunity to contribute their bit towards preventing food wastage. Together we can bring the change, one which is much desired and continue to live the brand promise Life’s Good!!”