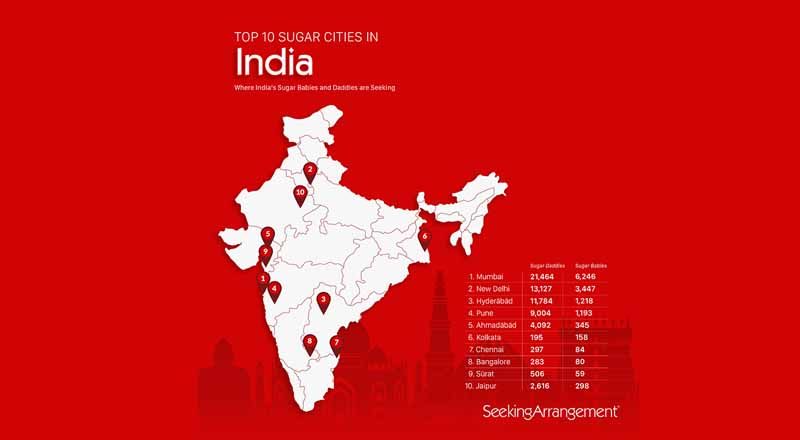 With a surge of privatization efforts aimed at education institutes in the country, India is no stranger to an exponential growth of student loan borrowers. Even before the pandemic swept the nation into all kinds of catastrophe, India’s economy has suffered a good deal of calamity already.

In 2019, India struggled with a 6.1% unemployment rate and today it’s risen to a staggering 27.11%. This inadvertently draws the spotlight on students who have taken up study loans, who are forecasted to default on their loans owing to the ever-increasing unemployment rates that have now led to India’s indebted youth needing a helping hand to navigate through these crippling times. See the infographic below for a complete breakdown of top sugar dating cities in India.

“Plagued by the ever-soaring costs of university fees and employment rates, urban youth in India are now seeking new means of funding with SeekingArrangement”

The consequence? A massive student loan debt burden that’s devastating thousands of families and serving as a shackle on the economy. It is forcing students to drop out of school before acquiring a degree. It’s no denying that this is our mutual problem.

“Even worse, students find themselves juggling multiple jobs while in university and oftentimes end up dropping out as they are unable to cope with the mounting pressure. On average, a sugar baby gets up to INR 35,000 in monthly allowances which could prove of great help to a struggling university student,” says Brandon Wade, CEO, and Founder of SeekingArrangement.

SeekingArrangement in their recent heat map analysis has identified that India’s most bustling and wealthiest city, Mumbai with the highest number of Sugar Babies (6,246) and Sugar Daddies (21,464) in the land, while the runner-up is the capital city — New Delhi with 3,447 Sugar Babies and 13,127 Sugar Daddies. Southern India’s Hyderabad city, which is big on the tech industry and home to many swanky restaurants and shopping malls, trails closely behind. These cities also boast some of the highest literacy rates in the nation and hence illustrate university students seeking financial support from Sugar Daddies or Sugar Mommies in India via the SeekingArrangement app.

“Sugar daddies and sugar mommies don’t only come in the form of providing financial assistance, rather they also serve as mentors, offering a host of financial guidance, networking opportunities, and career advancements, among others — in the name of raising the bar for aspiring professionals while they’re still in university,” he added.

Should you be interested in speaking with our spokesperson or for more information, or in talking to our members, please contact Annette at annette.joseph@seeking.com.