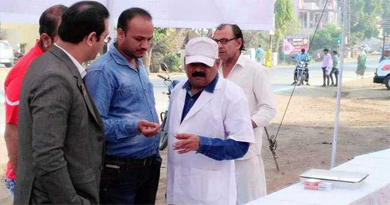 A social organisation from Bhikangaon town in Madhya Pradesh’s Khargone district has got its name registered in the Golden Book of World Records by conducting blood tests on as many as 2,501 people within a period of six hours.

The organisation, Lakshya Parivar broke the previous record set at California in the USA, where blood tests were conducted on 1,460 people in six hours, Asia head of Golden Book of World Records, Manish Vishnoi, said.

“In a period of six hours, Lakshya Parivar conducted blood tests on 2,501 people,” Vishnoi said. Vishnoi presented the certificate of the world record to Chandan Sharma, convener of the organisation.

The Golden Book of World Records team recorded the entire process on cameras.

According to Chandan Sharma, his organisation chose the Valentine’s Day to set the record to send a positive message to the society.