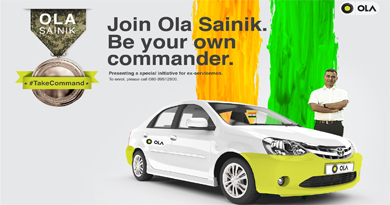 In support of the country’s Armed Forces and their families, Ola, India’s most popular app for transportation, launched an awareness campaign to raise funds on the occasion of Armed Forces Flag Day, observed on December 7 of every year.

This week-long fundraising campaign was kick-started by the Defence Ministry of India from December 1 and will run until December 7, 2017. The contributions from the fund will be used by the Ministry to ensure rehabilitation and welfare of the dependants of our brave martyrs and disabled personnel.

Ola is spreading awareness amongst millions of its customers across the country, urging them to visit their website which has been set up by the Ministry of Defence for contributions to the Armed Forces Flag Day Fund. Ola will also distribute Armed Forces Flags to the general public visiting Ola Kiosks across major cities, urging customers to contribute to the

Fund during the week-long campaign.

As part of the fundraising drive, Ola employees have pledged their contributions to the Armed Forces Flag Day Fund. Furthermore, Ola’s Driver-Partners are also extending their contributions through donation boxes set up at the attachment centres across the country, along with their personal messages of gratitude to the families.

Commenting on the initiative, Pranay Jivrajka, Founding Partner, Ola, said, “Many brave and gallant heroes from the Armed Forces have laid down their lives in the service of the country. It’s the collective duty of every citizen of our country to ensure rehabilitation and welfare of the dependents of our brave martyrs and disabled personnel. The Flag Day gives us an opportunity to contribute generously to the Armed Forces Flag Day Fund. I urge everyone to come forward to do their part.”

“Ola Sainik” programme was launched in partnership with the Directorate General Resettlement (DGR) under the Ministry of Defence. This partnership offers opportunities for ex-servicemen to become micro entrepreneurs with Ola. To support them in their goals of financial independence, Ola has invested in their reskilling enabling them to grasp the technology and making it possible for them to grow as skilled micro-entrepreneurs on the Ola platform.