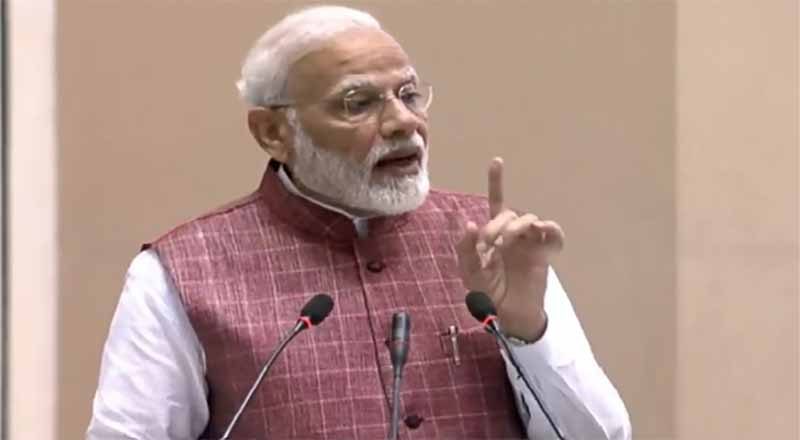 Prime Minister Narendra Modi launched the auction process of 41 coal mines for commercial mining through video conference and reiterated his call for India to become self-reliant in energy by reducing imports.Despite having the world’s fourth-largest coal reserves and being the second-largest producer, the country is the second-largest importer.

Speaking on the occasion, PM Modi said that India will overcome the COVID -19 Pandemic and the nation will turn this crisis into an opportunity. He said that this crisis has taught India the lesson of becoming  Self-Reliant. He said an AatmaNirbhar Bharat means reducing dependency on imports, and saving foreign currency on imports. It entails that India develop resources domestically so that the country does not have to rely on imports. It also means becoming the biggest exporters of the commodities that we now import.

To achieve this, the PM said that each sector, each product, each service, should be kept in mind and worked holistically, to make India self-reliant in the particular area. He said a major step taken today will make India self reliant in the Energy sector. He said that this event marks not only the implementation of reforms concerning one Coal Mining Sector but also  marks the beginning of lakhs of employment opportunities for the youth. He said that today we are not only launching the auction of commercial coal mining today but also freeing the coal sector from decades of lockdown.

He stressed the irony that India, with the world’s fourth largest coal reserve and being the second largest producer, is also the second largest coal importer. He said the situation has lasted for decades now and the coal sector was kept entangled in the mesh of Captive and Non Captive mines. He added that the sector was excluded from competition and transparency was a big problem. Owing to this, he said, the coal sector lacked investment and its efficiency was also questionable.

The Prime Minister said that in 2014, coal linkage was introduced to provide impetus to the coal sector. He said that India has taken a major decision to fully open the coal and mining sector for increased competition, capital, participation and technology. He added that care has been taken to ensure that the new players in the private mining sector do not face the problem of finance. He stressed that self-reliance is not possible without a strong mining and mineral sector as the two  are important pillars of our economy.

The Prime Minister said that after these reforms, coal production and the entire coal sector will become self-reliant. Now the market has been opened for coal, so, any sector can buy coal as per their requirements. PM said, these reforms will not only benefit the coal sector but other sectors such as Steel, Aluminium, Fertilizers and Cement as well. It will also help in increasing the power generation.

PM said that reforms in the minerals sector have got strength from coal mining reforms since minerals like iron, bauxite and other minerals are located very close to the coal reserves. He said that the beginning of auction today for commercial coal mining is a win-win situation for all stakeholders Industries. State governments will get more revenue and a huge population of the country will get employment. There will be a positive impact on every sector.

While implementing coal reforms, PM said that it has been ensured that India’s commitment to protect the environment doesn’t get weakened. He added, “Latest technology can be introduced to make gas from coal and the environment will be protected with steps like coal gasification. Coal gas will be used in transport and cooking while Urea and steel will promote manufacturing industries.” The Prime Minister said that the Government has set a target to gasify around 100-million-ton coal by the year 2030 and four projects have been identified for this purpose and around 20 thousand crore rupees will be invested.

The Prime Minister said that these coal sector reforms will make eastern and central India, our tribal belt in, pillars of development. He added that These areas have a big number of Aspirational Districts and have not been able to reach the desired level of progress and prosperity. He said that 16 aspirational districts in the country have a huge stock of coal but people of these areas have not got adequate benefit of this. People from these places have to migrate to far-flung cities for employment.

The Prime Minister said that the steps taken towards commercial mining will be very helpful to eastern and central India by providing the local population with employment near their homes. He said that the Government has taken a decision to spend 50 thousand crore rupees on creating infrastructure for coal extraction and transportation, which will also create employment opportunities.

The Prime Minister said that reforms and investment in the coal sector will play a big role in easing the lives of tribals. Extra revenue generated through coal production will be used for public welfare schemes in the region. He said that states will also continue to get help from the District Mineral Fund, from which a major chunk would be utilized in development of essential facilities in the surrounding areas.