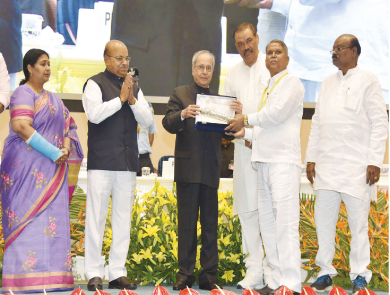 The award for the year 2014 was jointly presented to Babu Lal Nirmal of Rajasthan for his extraordinary contributions in upholding the rights of poor persons in rural and urban areas of Baran District and to Amar Sewa Sangam of Tamil Nadu for its extraordinary services being extended for the welfare of the marginalized population of the society including the physically and mentally challenged persons.

The President of India Pranab Mukharjee presented the “Dr. Ambedkar National Award for Social Understanding and up-liftment of Weaker Sections for the year 2011, 2012 and 2014” at a function in Delhi. The function was organized by The Ambedkar Foundation under Ministry of Social Justice and Empowerment. The award consists of a citation and Rs. 10 lakh as cash prize.

The award was instituted by the Government of India in the year 1992 and is given for outstanding contribution to the promotion of social understanding and for the upliftment of the weaker sections in India. One Award each year is presented to individuals or organizations and is presented jointly or shared by more than one recipient or organization as may be considered by the Jury to be equally deserving of recognition in the year.

Addressing on the occasion President Pranab Mukherjee said, “Social justice is the most important factor in the development of a developing country. The government alone can not do such things and the involvement of people and organizations is necessary.”

Born on 9th July, 1959 in Ataru Rajasthan, Shri Babu Lal Nirmal, is considered to be the voice of the oppressed and neglected people of the society in Rajasthan. He is a known face in Baran district, who has established a strong network for assisting the needy population in making them aware of their rights.