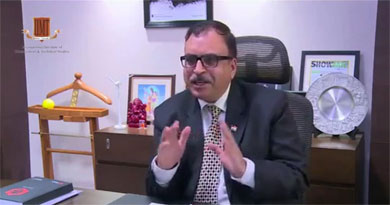 With increasing industrialization, environmental issues are getting a center stage. Ecological degradation has its own consequences such as loss of vital lifesaving resources like water and food. Besides, loss of productive soil, increasing pollution, depleting terrestrial and marine resources can pose serious challenges for India’s one billion plus population. Climate change has further added new dimension to these challenges. We can endlessly debate the consequences of climate change as it seems to be a new ’environmental mantra’ or advocacy focus. However, no one is immune to its consequences. Subtle change in atmospheric temperature, rise in sea temperature and sea level, acidification of ocean etc. has its share of problems.

Responsible corporates have to keep in mind the triple bottom line, but also take lead in showing the world new ways of development – ‘the sustainable development’. It is easier said than done. Some beginning has to be made. Following the precautionary principal, it is better to be ‘proactive’ than ‘reactive’.

Big infrastructure development projects in various ecosystems in coastal, mainland, desert or mountain areas generally come in close proximity of ecologically important areas. It is therefore very essential to understand the surrounding and assess the environmental and social impacts that these projects are going to have in the value chain.

Ecosystem processes and biodiversity form important part of Earth’s life support system. Rapid industrialization and climatic changes has pushed many species to extinction while several thousand face the same fate. Dams, mines, roads, and other infrastructure development besides impacting large human settlements have fragmented wildlife habitats thus making wildlife population more susceptible to diseases and in breeding and putting them to the risk of extinction.

Human survival depends on the complex chain of ecosystem processes and biodiversity. Contribution of insects in agricultural is critical so does role of soil run off to the sea. Understanding biodiversity is thus important.

In the renewable energy space, many people see their own technology as the way forward, arguing their point endlessly while claiming that other technologies are not quite “there” yet – or marginal at best: we need to work together – and soon. The Government is promoting and recommending renewable, efficiency, grids, transport and training. So opportunities will be emerging at all levels, despite the difficult economic landscape in general. To make these things happen on a larger scale we will need not just taxpayer hand-outs, but policy drivers. These have been most commonly applied to renewables, but are now spreading into many other key areas, including energy efficiency, manufacturing, waste, buildings and transport.

The preference would be for biological carbon sequestration, or bio-sequestration, rather than geo-sequestration. Besides ecosystem restoration, reclaiming fertile land from the deserts and improving the health of the oceans and soils, is critical to increasing the carbon-absorbing capacity of the biosphere. Forests need to be created, recreated or protected worldwide, soils can be improved with organic farming methods, and sea grass and mangrove restoration can not only yield many benefits to the biosphere, but also local economies.

It has been realized that these projects were not able to come up as the adverse impacts were not foreseen and appropriate mitigation measures taken. The livelihood of the Communities near these Projects was affected and most of the Hydro Electric and other Projects were in great stress and risks. It must be reiterated that some areas are priceless in terms of ecosystem quality and biodiversity, and no amount of mitigation measures can reduce the damage. Such areas must remain inviolate areas for any activity and Corporates are expected to exclude such areas from undertaking any activities.

However, the difficulty is that every location and every ‘key community’ is distinctively separate from other and hence their needs differ widely. Thus developing a baseline protocol for biodiversity assessment and mapping of all existing as well as proposed sites and developing a long term plan for conserving the biodiversity at existing as well as proposed sites becomes very critical part of CSR. In pursuance the three primary goals for sustainable social trusteeship, specific issues and tasks need to be identified for each type of project and activity. There are alternate methods of classifying these issues and tasks and organizing them for easy comprehension. One way to do this is by organizing them so as to easily interface with the organizational structure of the organization.

For each of the issues and impacts, specific strategies need to be developed to prevent, minimize, mitigate or compensate for adverse impacts. There are few overriding principles that must be kept in mind while strategizing.
The prescribed values and standards are dynamic, involving a constant effort to improve upon them. On the other hand they are not theoretical constructs but based on best practices within the company and elsewhere.
Processes are as important as outcomes, and essentially the means must be as ethical as the ends. To ensure that the strategies and objectives are appropriate and optimal, they must be designed and implemented in a participatory and transparent manner.

It is essential for there to be coordination and cooperation between institutions and agencies within and outside the company, so that overlaps can be avoided, and each learns from the experience (and expertise) of the other, ensuring that the good work done by one is not inadvertently undone by another.

All aspects of the strategy need to be constantly monitored, whether it be the setting or pursuit of values and standards, the processes being employed, the performance of the selected institutions and even the monitoring system itself – a type of meta monitoring.

CSR role has also to be perceived as a strategic consultant and think-tank. They combine business acumen with in-depth knowledge of the global sustainability agenda, including the challenges in emerging economies. They have to work with businesses to identify and manage key environmental, social and economic risks and opportunities and to develop innovative solutions that will protect and create future value. CSR has to work with those who have far-reaching influence and who will be central to creating a sustainable future. All CSR work has to draw on long established relationships with leaders and experts from around the world. Their networks bring insight to key issues and dilemmas from the perspectives of business, civil society, international institutions, nongovernmental organizations, consumers and beyond. Their formal partnership with various Foundation focuses on social entrepreneurship and the challenge of scaling-up sustainable innovations into mainstream businesses.

Large corporate footprints can transform the landscape of an area. While this may bring progress for local communities, it also results in large ecological footprints in the extraction of the natural resource base as well as in the disposal of effluents. The industrial activity eliminates grazing grounds, stress the water table, eliminate pastoral livelihoods etc. Corporates can bring about sustainability through support for biodiversity resources on the vast grounds with them – a careful choice of vegetation can generate fodder and other NTBF resources [herbal products] which can set in motion new forms of livelihood. Corporate entities could lend a helping hand by helping train displaced villagers, providing marketing support. A traditional health system can also be revived based on the medicinal value of the on-site vegetation. Support could also be given to revive the traditional weather forecasting system and skills of the area in a formal way.

CSR can play a major role in reversing the degradation of the environment by ensuring ecological optimization of the eco systems thus enhancing the ecological and CSR services to the society by biodiversity mapping of various project sites, creating and protecting green corridors, execution of a biodiversity conservation program – either flagship species or seascape conservation and setting up of a environmental leadership training centre.

It was decided to use relatively non mobile species as measuring impact of the project is much easier, robust and measurable. Six mollusc species were used as indicators to monitor for change in substrate due to development activities. Molluscs an excellent indicator due to their selective habitat requirements was used to understand the natural density fluctuations of selected marine molluscan fauna. Seasonal counts (covering monsoon, post monsoon, winter, and summer months) were taken in correlation with temperature as one of the important variables. The data provided important information regarding spatial distribution of these six species. Based on this data monitoring protocols were developed.

One of the major issues that came up in the land acquisition process was also the loss of grazing land of the local communities. As the land was very arid, it could not support grazing for the cattle, the local communities agreed to have a fodder supply arrangement rather than provision of land as best option. Fodder Supply arrangement was initiated for villages by registering a Charitable Trust. The construction of the fodder supply centre was done through a Trust registered in consultation with the villagers. The funding for the fodder supply was given by the Corporate. The Trust was managed and run by the Village Trustees. The result of this activity was that the production of milk increased substantially and the selling price of milk per litre also increased. This Project also created a unique biodiversity protocol created for coastal areas and a close decision making relationship with regional stakeholders.

This project increased India’s generation capacity by 3% and impacted about 16 million domestic consumers in the country. Local biodiversity was preserved sustainably with active participation of all stakeholders and created 5,000 construction jobs and 700 jobs during operations. It was also the most energy-efficient plant in India (40.5%) compared to existing assets (about 27%) & therefore had lower GHG emissions. l