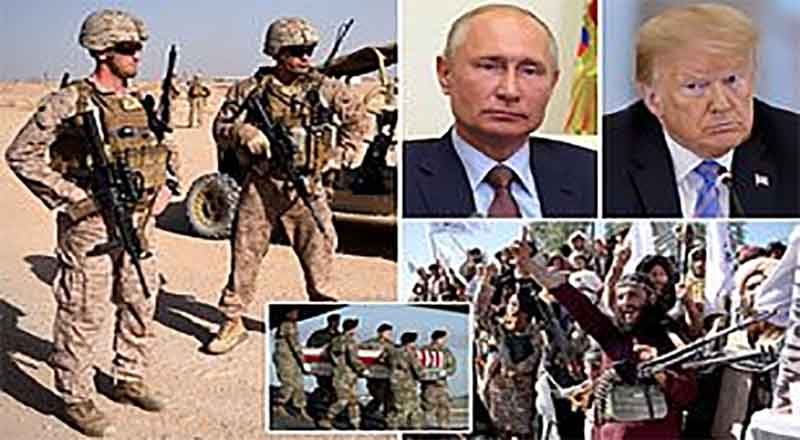 The official was unclear as to the precise Russian motivation, but said the incentives had, in their assessment, led to coalition casualties. The official did not specify as to the date of the casualties, their number or nationality, or whether these were fatalities or injuries.

“This callous approach by the GRU is startling and reprehensible. Their motivation is bewildering,” the official said.

US intelligence concluded months ago that Russian military intelligence offered the bounties, amid peace talks, a news paper reported.

Citing officials briefed on the matter, as reported that President Donald Trump was briefed on the intelligence findings and that the White House’s National Security Council held a meeting about it in late March.

White House press secretary Kayleigh McEnany said in a statement on Saturday that the President and Vice President Mike Pence were not briefed “on the alleged Russian bounty intelligence.”

McEnany did not deny the validity of the reported US intelligence that a Russian intelligence unit offered bounties to Taliban-linked militants to carry out attacks on coalition forces in Afghanistan.

Director of National Intelligence John Ratcliffe said in his own statement late Saturday that he had “confirmed that neither the President nor the Vice President were ever briefed on any intelligence alleged by the New York Times in its reporting yesterday.”

He added, “The White House statement addressing this issue earlier today, which denied such a briefing occurred, was accurate. The newspaper reporting and all other subsequent news reports about such an alleged briefing are inaccurate.”

The Russian Embassy in Washington, DC, denounced the news report as “baseless allegations” that have led to death threats against Russian diplomats in Washington and London.

“In the absence of reasons to #BlameRussians,” the news paper is inventing “new fake stories,” the embassy wrote on Twitter.

The Taliban also rejected the report that they were offered bounties from Russia to target US troops in Afghanistan.

“We strongly reject this allegation. The nineteen-year Jihad of the Islamic Emirate is not indebted to the beneficence of any intelligence organ or foreign country and neither is the Islamic Emirate in need of anyone in specifying objectives,” the militant group’s spokesman Zabihullah Mujahid said in a statement.