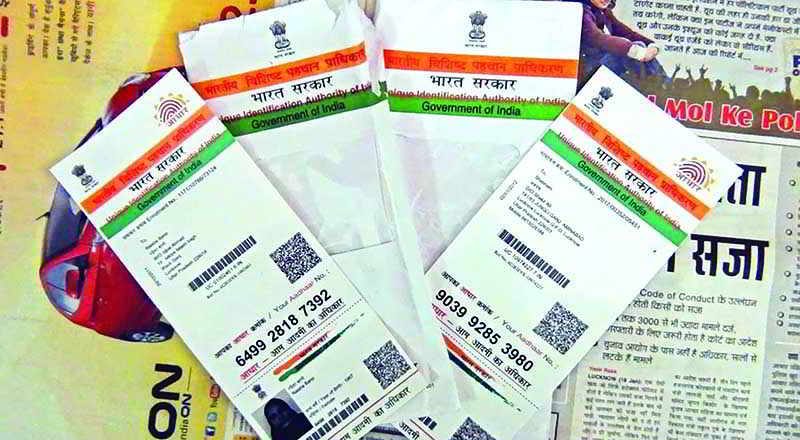 The five-judge constitution bench, led by Chief Justice Dipak Misra, delivered their verdicts on the controversial issue of Aadhaar, upholding its constitutional validity. A total of 31 petitions had challenged the verdict citing violations of the right to privacy. The Supreme Court has delivered verdicts on whether the mandatory linking of Aadhaar with welfare schemes, bank accounts, PAN, etc, violates the privacy of individuals or it is necessary to maintain accountability and ensure all government benefits reach the poor.

The Unique Identification Authority of India (UIDAI) has the biometric data of 122 crore Indians. Several questions have been raised over its safety and security, fearing the data theft could lead to leakage of personal information.

• It is mandatory to link PAN card with Aadhaar
• Aadhaar is a must for filing income tax returns
• Aadhaar is necessary for availing welfare schemes and subsidies given by the government
• Aadhaar data is not needed for opening a bank account as the SC struck down Section 57 of the Aadhaar Act which allowed private companies to avail Aadhaar data
• With the SC striking down Section 57 other private entities like telecom and e-commerce firms are now barred from asking for Aadhaar. So, Aadhaar is not needed to get a SIM or shop online.
• Aadhaar is not needed for admission in schools adding that no child can be denied benefits of any schemes on not being able to bring Aadhar.
• Aadhaar no more compulsory to appear in CBSE, UGC and NEET Examinations
• Aadhaar Act does not violate privacy of citizens
• Aadhaar can be passed as money bill
• The court strikes down mobile-Aadhaar linking
• Aadhaar cannot be mandated for opening of bank account

Rajan S Mathews
DG, COAI
“We respect the Aadhaar verdict of the Hon’ble Supreme Court, the apex court of India. We are going to review the judgement and its implications. We shall await further orders and instructions from DoT. Our member operators as always will definitely comply with the law.”

Ramesh Mamgain
Area Vice President, India and SAARC Region – Commvault India
“The honourable Supreme Court of India has made the right decision by de-linking Aadhaar data from mobile phone and bank accounts. This will go a long way in protecting user data and ensuring that there are fewer risks in data leakages. However, private enterprises will need to get their act together quickly to migrate to GDPR norms and ensure that secondary data is managed securely across locations.”

Ajay Bhargava
Partner, Khaitan & Co.
“By striking down Section 57 of the Aadhar Act, which provided that anybody corporate or any person pursuant to any law can use the Aadhar number for establishing the identity of any individual, the Supreme Court has highlighted the urgent need for a robust proper data protection law in the country.”

Rana Gupta
Vice President – APAC Sales, Identity and Data Protection, Gemalto
“Honorable Supreme Court’s judgment around the constitutional validity of Aadhaar Act shall be seen as a milestone in the ongoing journey and not an end by any means. This judgment clarifies the voluntary usage of Aadhaar but in reality it preserves the core aspects by stopping leakage of public money to unscrupulous elements by mandating the use of Aadhaar for availing any government subsidies and benefits, as well as stopping the money laundering by mandating the linkage of PAN cards with the Aadhar.”

Anshuman Singh
Senior Director Product Management – Barracuda Networks
“In the current situation, without a strong cyber security and data protection legislation, private organizations are not mandated to report data theft to public nor are they required to report on how they will be using any of the user data that they collect. The Supreme Court’s decision on usage of Aadhar is well balanced and nuanced.”